Dr Karen Joyce from James Cook University’s College of Science Technology and Engineering is excited about the opportunities, and efficiency, that UAS bring to her field.

“My main interest is using it as a way we can capture image data for environmental monitoring,” she says. “They give us that ability to look at the environment from above but with the same sort of detail that we’d see when we’re actually on the ground.”

The machines can be used in a variety of areas including national parks, agricultural land or, in Karen’s case, marine areas.

“One of my main areas involves coral reefs – looking at habitats, how healthy the coral is, sea grasses, that sort of thing,” she says. “We also do work in tropical savannahs looking at fire ecology as well. There’s a really broad range of application that we can get into just by having the technology available to us.” Another application for UAS is in agriculture where it could be used to make assessments faster and more accurately than humans could.

“If you capture lots of photos over an area, bring it back and put it into a computer system, you can train the computer to look at different things,” Karen says. “That could be something as simple as automatically counting mangoes on a tree, through to assessing the health of different crops and the amount of nitrogen or fertiliser they need or the amount of water that’s required.”

Although some people may disregard UAS as the latest equipment fad, Karen believes they are here to stay.

“Technology is going to lead us to places we just haven’t imagined yet,” She says. “If you think back to the Jetsons cartoon it forecast a bunch of things we laughed at at the time – like there’s no way we’d be able to talk to someone on a television screen but here we are with Skype being a normal thing.

“I think there are things around today which may become obsolete because there’s just bigger and better things out there but I think we’re only seeing the start of UAS at the moment.”

Karen predicts that the next step for UAS will be to become more amphibious so they can go under water as well as fly but the biggest change will be affordability.

“It’s happening rapidly already,” she says. “Something that’s available now wasn’t close to being available six months ago. The prices are coming down and these things are becoming so much more accessible.” 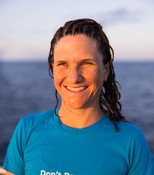 Dr Karen Joyce
I graduated in 2005 with a PhD in Geographical Sciences from the University of Queensland. My focus was on mapping live coral cover using remote sensing. Using my remote sensing expertise for a variety of applications, I have since worked as
Read profile