When the fish bones tell stories

Postdoctoral Research Fellow Dr Ariana Lambrides examines fish remains from island and coastal archaeological sites in Australia and the Pacific. But what she enjoys most is doing research in collaboration with Aboriginal and Torres Strait Islander communities.

Ariana is an ichthyoarchaeologist; she researches fish remains from archaeological sites. Her research aims to understand how people in the past created and lived in marine landscapes, and the influence of this landscape on modern reef biodiversity and biogeography. “I am interested in examining the dynamics of Indigenous fisheries over thousands of years,” Ariana says. “I would like to understand people’s decision-making around what fish species to eat and which habitats to fish from, but also examine how this may have changed over time.”

Ariana recently received a Discovery Early Career Researcher Award (DECRA) from the Australian Research Council, which will fund her research about one of the most popular pastimes on the Great Barrier Reef: fishing. Lizard Island, which is called Jiigurru by the local Aboriginal people, lies off the coast of Cooktown in Far North Queensland, and it is one of several regions that Ariana is especially interested in.

“JCU’s Distinguished Professor Sean Ulm and Professor Ian McNiven from Monash University have both been working in partnership with Dingaal and Ngurrumungu Traditional Owners on Lizard Island since 2012,” Ariana says. “They were hoping to better understand the Indigenous history of the region. During an excavation of a large shell midden, they recovered many thousands of fish bones, which is quite rare for sites on the eastern Queensland coast.”

A closer look at shell middens

A shell midden, or a shell mound, is a central place where people would leave their food rubbish – such as fish shells or fish bones. If a particular shell midden was used for a long time, it could sometimes become quite big and easy to spot, such as the unusual shell midden that Sean Ulm and Ian McNiven’s team found on Lizard Island.

Ariana says that most middens in the Lizard Island region were quite different from this exceptional find, because they generally don’t contain so many fish bones. “This provided me with an excellent opportunity, and I joined the team as a postdoctoral researcher at JCU Cairns as part of the Australian Research Council’s Centre of Excellence for Australian Biodiversity and Heritage (CABAH) in 2018.”

A reference collection of fish bones

In the past couple of years Ariana has worked to build a new reference collection of fish bones from the Great Barrier Reef. “With no reference material, it's hard to classify what we find,” Ariana says. “I am putting a lot of work into this, and it's developing nicely now.”

Ariana expects that the growing collection will help her to speed up her work. “Imagine, you have all of these tiny, fragmented fish bones from an archaeological site, but you need to determine the species of fish they are from. This is much easier to do if we have access to modern reference material,” she says.

However, the sheer number of fish species (biodiversity) found in the waters of the Great Barrier Reef is very high. This can make identifying these fragmented fish bones difficult, even if you have a comprehensive reference collection already. “The features on the bones are sometimes not distinct enough to allow you to identify the particular species,” Ariana says.

“This is why we use two complementary methods. First, I analyse the bones based on their morphological features. Then some of these bones are sent to Dr Michael Buckley’s lab at the University of Manchester to verify the identifications that I have made. In the lab, they use an approach called 'ZooMS' (Zooarchaeology by Mass Spectrometry) where they use collagen fingerprinting to conduct species identifications of archaeological bone.”

By using collagen fingerprinting, scientists are able to establish more precise identifications. “It gives us a more specific understanding of where people were going in the environment to fish and, the particular fish species people were choosing to eat. It also helps us to better understand the fishing technologies that may have been used,” Ariana explains.

On Lizard Island (Jiigurru), people were preparing and eating fish at what the Dingaal and Ngurrumungu Traditional Owners today describe as their campsites. “They weren’t looking for the big catch,” Ariana says. “In the past, people were targeting smaller reef fish, like parrotfish, wrasse and small reef sharks.”

These species are generally found within the Lizard Island lagoon, quite close to land. “We don't see a lot of evidence that large fish were caught. So, perhaps people weren’t necessarily going further offshore to catch fish, but instead there may have been a preference to net or spear fish close to shore.”

Talking history with the Traditional Owners

One of the best things about her job, says Ariana, is working in partnership with Aboriginal and Torres Strait Islander communities. “For the communities that I have the privilege to work with there is a real love and connection to the ocean and fishing. As soon as you mention fishing, everyone's eyes light up,” Ariana says. “There is real excitement around conversations about fishing. There is a shared interest in learning more about what range of species and habitats were used by the Old People and how this compares to what communities are doing today.”

Ariana thinks that researchers get more meaningful results if they work together with Traditional Owner communities. “We have an expertise, which is looking at the archaeology in terms of the scientific techniques that we can implement – such as excavating and analysing the recovered finds,” Ariana says. “But in terms of interpretation, it's about coming together and discussing our finds with communities in partnership.”

The past and the future lies in the bones

Looking back at the past twelve months, Ariana says, “my focus has been on meeting with Traditional Owners of the Great Barrier Reef region. We were having plenty of discussions about fish and fishing. Together we have been co-developing research questions and refining our research approach.”

Ariana is currently looking forward to conducting fieldwork again on Country with Dingaal and Ngurrumungu Traditional Owners. “We will be excavating a new midden site on Lizard Island (Jiigurru), but we will also have the opportunity to spend some time fishing together,” she says.

"Working in partnership with local communities is fundamental to my research. This is what gives meaning to our work as archaeologists."

For Ariana, fish bones do not only tell stories about the past and the deep Indigenous history of the Great Barrier Reef, but they also highlight the importance of continued connections to Country, especially when it comes to supporting the outlook and management of the region now and in the future.

Learn more about the history of Lizard Island (Jiigurru)

The work of Ariana and her fellow researchers from the Centre of Excellence for Australian Biodiversity and Heritage (CABAH) will be on display as part of the exhibition ‘Connections across the Coral Sea: A story of movement’.

The exhibition at the Museum of Tropical Queensland in Townsville explores relationships between seafaring cultures of southern New Guinea, Torres Strait and the northeast coast of Queensland across millennia, and it runs until 2 May 2022.

You can also learn more about Ariana’s work in the podcast “Fish for Thought".

Pursue your passion for uncovering the past 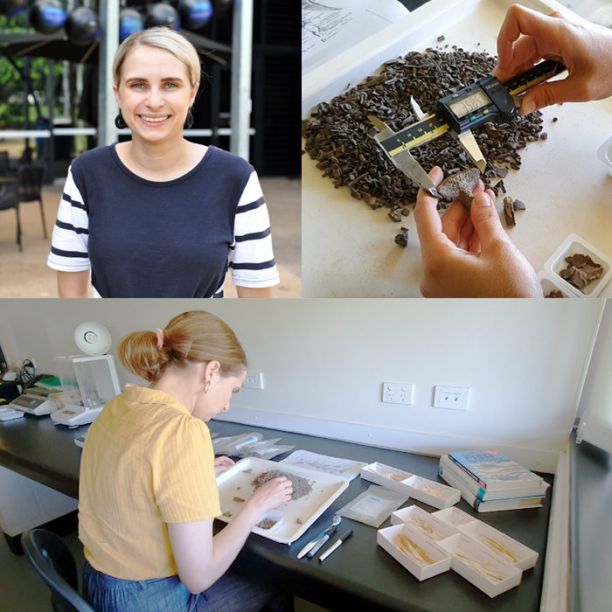 Ariana Lambrides is an archaeologist and ARC DECRA Fellow in the College of Arts, Society & Education at JCU. Ariana's research focuses on the human palaeoecology of island and coastal settings through the study of archaeological fish remains. Her priorities have been the development of methods to improve data quality in zooarchaeological research, examining the dynamics of Indigenous fisheries across millennia, and assessing the role of people in shaping biodiversity and landscapes through time. She has been involved in field- and laboratory-based projects across the Pacific and Australia.

Ariana is currently investigating Indigenous marine fisheries along the eastern Queensland coast, specifically the dialogue between people and the local environment and how this shaped culture, landscape dynamics, and biodiversity over millennia. This research aims to provide a deep time perspective relevant to contemporary fisheries management within the Great Barrier Reef Marine Park.