COVID-19's continuing impact on our economy

College of Business, Law and Governance

In April, JCU Associate Professor Taha Chaiechi gave us the breakdown on how COVID-19 was affecting our economy. Six months later, Taha is back with an update on how half a year of uncertainty has changed our economy.

Since coronavirus was declared a global pandemic, we entered a strange new world of isolation, distancing, and, unfortunately, recession.

Due to the COVID-19 crisis, we are currently living in the first Australian recession in 30 years. The June quarter national account reports that economic activities fell by seven per cent, as opposed to the 0.3 per cent dip in the March quarter.

Industries that have been hit the hardest include Transport Services, which declined by 85 per cent, the Accommodation and Food industry with a 40 per cent decline, and Arts and Recreations Services with a decline of 23 per cent.

“Other badly hurt industries are particularly those with pre-existing vulnerabilities, such as the manufacturing industry,” Taha says. “Australian manufacturing has been facing strong competition from lower-cost countries for at least the past decade now.”

The tourism industry has a large portion of its workforce made up of casual and lower-income workers, resulting in substantial job loss among these groups during this crisis.

The people behind the percentages

“The crisis has brutally constricted financing conditions for many businesses across the revenue spectrum, disrupting supply chains, trade, and the flows of investment,” Taha says.

While larger businesses may have been able to push through, in many situations it was at the cost of employees. Many small, local businesses have struggled to survive and have been forced to close their doors. The crisis cost not just the overall economy, but the sole income for families, the dreams of business-owners, and the security of many Australians.

Taha says the Australian government’s response to the crisis has been “continuous”, working to create and provide stimulus packages, fiscal and monetary policies, and liquidity supports, as well as using the welfare systems to support those who need it.

“Some work has been underway to compensate for the undesired social and mental health consequences of the pandemic,” Taha says. “But we need to do more in those areas.”

As we work towards recovery, this is the time to put the effort in to care for not only our own health and wellbeing, but to check up on our neighbours and lend a hand however we can.

The Australian government has worked to address the struggling economy through an economic hibernation – the deliberate shutdown of large sections of the economy.

This is a move that Taha calls “unprecedented”.

“This is not a normal cyclical contraction caused by a normal business cycle,” she says. “The evidence is showing that the pandemic has an overwhelmingly disproportionate impact on insecure and vulnerable economic sectors. The government has been forced to provide far more than its usual short-term fiscal and monetary incentives and extended its actions to further targeting temporary economic measures and stimulus.”

Taha says such measures include supporting the flow of credit for small and medium-sized enterprises (SMEs), temporary relief for financially stressed businesses, increased JobKeeper payments and Youth Allowance, and the $1 billion Relief and Recovery Fund.

But these efforts aren’t without their costs.

“The government’s plan to clear net debt has also been shattered by the crisis,” Taha says.

“It is predicted that our net debt will be some 14-24 per cent higher in 2030 than it would have been without this pandemic.”

“It’s not all doom and gloom.”

Though there is great cause for concern in our nation, it is important to keep a global and informed perspective.

Other western economies have been hit much harder than Australia. The UK’s economy has shrunk by more than 20 per cent, and the US economy has declined by nearly 10 per cent. Comparatively, Australia’s economy has faced a 7 per cent decline.

“While there is a need for a full-fledged economic recovery and reconstruction plan across the globe, it’s not all doom and gloom for Australia,” Taha says.

“For example, Australia appears to be exiting the pandemic with lower government debt than many other advanced countries.

“Another example is international trade surplus during the pandemic. The national account shows that while both import and export have been negatively impacted, Australian export has dropped less than its import, helping support the GDP and unemployment during the pandemic.”

According to Taha, the early economic indicators suggest that the government’s responses to the crisis during the June quarter are beginning to pay off, leading to a noticeable recovery in GDP from the September quarter. However, the expected recovery will continue to remain below pre-pandemic levels for some time.

An additional benefit that Taha points out is that the pandemic provided an opportunity to identify weak spots within certain industries. “The good news is that the work is now underway to evolve and overcome weaknesses in order to build a more resilient economy,” she says.

“It will be a long road to recovery, but we are stepping in the right direction.”

The impacts of the crisis have also caused a shift in value systems. Many industries have started creating changes through policies and actions. “For businesses, increased efficiency should no longer be the main goal,” Taha says. “They need to plan and design for resilience.”

Taha says that as operating models evolve, we need to diversify our skillsets and invest in skills that can be applied across several industries.

The post-pandemic economy may be complex for some time, and we must take careful steps forward as we recover, both individually and as a society. But as we move slowly forward, the best strategy that we can take is to focus on being resilient and working together to be ready for anything that may come our way.

Interested in how our economy can both shape and be shaped by societal changes? Find out where JCU Business, Law and Finance could take you. 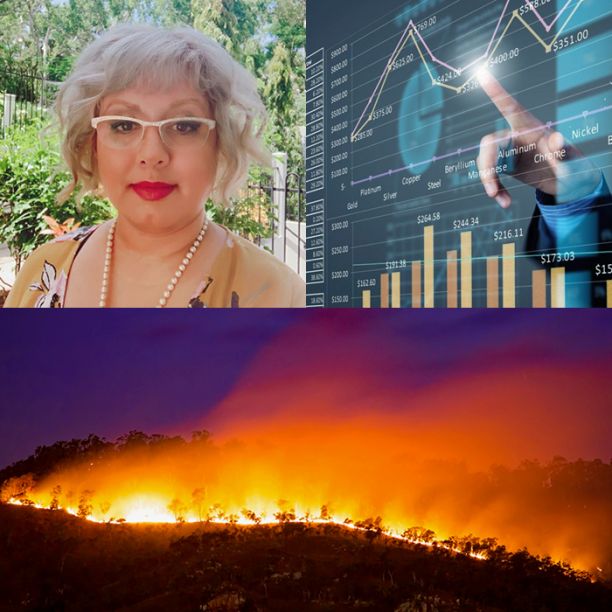 Taha is an expert in systematic modelling of relationships between economic, environmental, and social variables. Taha’s research attitude is holistic and inspired by issues in climate change and natural disasters, and their impact on different economic sectors. Since 2011, Taha has been collaborating in several research projects exceeding $1 million in value.