Teaching adventures in the Pacific

International Day of Education is on 24 January 2021.

Dr Greg Burnett trains future teachers and researches quality teaching at JCU Cairns. Greg knows very well how difficult it can be for teachers to preserve the local culture and at the same time give kids the tools to deal with a globalising world.

“Nauru is a very remote part of the Pacific,” Greg says. “A single raised atoll, a little dot in the central Pacific. I guess I was after a bit of change, a bit of adventure.” So, he said ‘yes’ and moved to Nauru.

Teaching in the Pacific Islands

That is how Greg’s Pacific adventures started, back in 1988. He taught children in Nauru, fell in love in nearby Kiribati and completed his PhD degree in Education in Australia, before going to Fiji, where he taught future teachers from many Pacific Island Nations. Last year, Greg moved to Cairns to help educate future teachers at JCU. With years of experience under his belt, Greg Burnett has had a lot of time to think about what different Pacific Island Nations define as quality teaching.

The reality of teaching in the Pacific Islands

“There are different sets of beliefs about what is quality teaching, if you move from one Pacific country to another,” Greg says. “Teacher education students get a certain sense of what constitutes quality teaching at the university in Fiji. The students are encouraged to take a learner-centred socially interactive view of teaching and learning. But when they return to their home country, it’s not quite the same. There is a little bit of tension that they have to negotiate."

“For example, in many parts of the Pacific conservative beliefs about children and young people mean that classrooms must be teacher-centred and controlled.” In Fiji, for example, children are expected to be passive learners. But the Northern Pacific Islands, such as Kiribati or Micronesia, are influenced by the more liberal United States of America.

Maintaining the basics is sometimes challenging

However, there are other things, simple things, that can make a teacher’s job very difficult. Freight by sea is slow and expensive by air. “The physical infrastructure of schools in the Pacific in general is hard to maintain,” Greg says. “Just the basic things, like tables, chairs, are sometimes in a state of disrepair or even non-existent. In my early Pacific school teaching, children would often have to sit on the floor. Electricity was provided by a small generator or not all.”

As a result, Pacific countries also rely on foreign aid and consultancy. Sometimes this works out very well, as in a teacher education project in Nauru that Greg was a part of. “But there are instances of foreign educational assistance in the Pacific that have not been as successful. Pacific educators need to work very hard to maintain autonomy and control when it comes to outside assistance.”

There is also another controversy that Pacific nations need to tackle, and that is the debate about Westernised education: how much is too little or too much? “A lot of Pacific island countries have no choice but to juggle globalising influences from the West with a local sense of identity,” Greg says. Perhaps one of the most important aspects is teaching children across the Pacific how to read, write and speak English.

“Pacific schools have this responsibility to somehow improve the English language competence of the children. With nothing. Particularly in the rural areas of many Pacific countries, where English is not used at all. In Fiji, education is in English. But in other parts of the Pacific such as Kiribati and Tuvalu, not always,” says Greg Burnett.

“So, schools have to juggle language and education policy and the same time, they need to maintain those all-important first languages that are linked to local culture and identity. But there is also the practical necessity for the population to also speak English in a globalising world.”

Dealing with education in a globalising world

Juggling the local with the global is a particular challenge that Pacific nations face, and which they share with Australia, which is also a multicultural country. “But I think it’s more marked in the Pacific,” Greg says. “The Pacific struggles to self-determine in the face of an ever globalising and homogenising West.”

However, as an educator with first-hand experience in these matters, Greg is doing his best to prepare his students for the real world, and giving them the tools to find their own path between tradition and modernity, no matter if they are going to teach in Australia or in the Pacific.

The third International Day of Education (which falls on a Sunday) will be marked on Monday, 25 January 2021. This year's theme is ‘Recover and Revitalize Education for the COVID-19 Generation’. 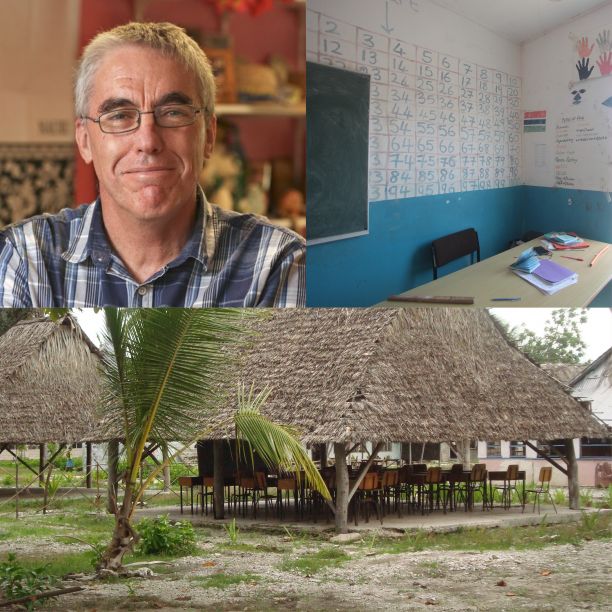 Dr Greg Burnett is a Senior Lecturer in the College of Arts, Society and Education at JCU Cairns. His research and teaching emphases include: a broad sociology of education; the influence of cultural and other social difference on schooling; and an exploration of critical and postcolonial theory as a basis for teaching, learning and researching in teacher education, particularly with a Pacific focus.

His professional and personal life have been shaped by a complexity of “routes” or pathways that have led originally from Australia to Nauru, Kiribati, Fiji and New Zealand to name but a few places in the wider Pacific region. In each of these he has lived and worked as an educator at various levels, as well as a researcher, for extended periods over the last 30 years.