The secrets of our ancient oceans

How the continents and Earth’s oxygen are linked

Geologist and geochemist Dr. Alex McCoy-West researches when and how the continents emerged out of the oceans to create the liveable planet that we know today.

Long before the dinosaurs, more than 2.5 billion years ago, the Earth from above probably looked like a lonely water world. There were none of the large continents that we are used to seeing today and no oxygen.

“The modern Earth is based on us having an oxygen-rich atmosphere. Without oxygen, we wouldn't have much life on Earth,” Alex says. “Very early in Earth’s history, in the Archean era, there was still very little oxygen available in the oceans or the atmosphere. The oceans were also filled with iron that never rusted because there was almost no oxygen.”

Like the oceans, the continents were also different in those times. Earth’s early crust was dominated by a rock called ‘basalt’, which looks like the volcanos in Hawaii, and the crust was not so buoyant as it is today.

“All continents are like icebergs, floating on the Earth’s surface,” Alex says. “If the continents were not made out of silicate-rich material, such as granites, they wouldn’t float as high on the Earth’s mantle as they do today.”

From heavy basalt to ‘floating’ granite

At some point in Earth’s early history, as the Earth’s core cooled, the composition of the continents changed from basalt to granites. The continents became more buoyant and eventually emerged out of the oceans. They started to weather and disintegrate. Alex says this moment “was pivotal for all life on Earth,” because the weathering of these rocks added more elements, such as phosphorus, to the oceans.

Tiny cyanobacteria (single-celled organisms) fed on the phosphorus and created the oxygen we need to breath as a waste product. “This shows that Earth’s tectonics and the evolution of life are intimately linked,” Alex says.

The unsolved mystery of the continents’ emergence

However, when did the continents emerge out of the ancient ocean? That is still not clear today. “People would probably agree it was around 2.7 to 2.5 billion years ago when the continents emerged,” Alex says. “But some papers published in the last few years say that happened perhaps as late as 700,000 years ago. Alternatively, some people even say it was right at the start of Earth's history.”

Aside from the timing there is one other question that still does not have a definitive answer. “We don't know how this process occurred. Was it super rapid, was it gradual, or did it happen in stages?”

This is why Alex is using his expertise in geochemistry as well as the latest technology to analyse rock samples that are billions of years old and gain a deeper understanding of what exactly happened and when.

Studying changes over time in rocks from Western Australia

As a geochemist, Alex says his work is essentially applying chemistry to understand rocks. “Geochemistry is when you look at the different compositions of rocks to understand their formation. It's all based on elements and isotopes, which are also atoms, but with different numbers of neutrons,” Alex says and adds that neutrons are sub-atomic particles with a ‘neutral’ charge.

In this respect, Alex is especially interested in looking at changes over time in rock samples from Western Australia. These samples are drill cores that used to be the ocean floor billions of years ago. “I am looking for the primary ocean signature,” Alex says. “But it's not the ocean water, it's the ocean floor sediments that have turned into rock, that I am interested in. This is what is telling us about the oceans two or three billion years ago.”

In his current Discovery Early Career Researcher Award (DECRA) research project, Alex is focusing on banded iron formations, which are called such because the rock samples show ‘bands’ of iron in between other sediments.

Neodymium and other isotopes

A proven method to investigate the geochemistry of ancient rock samples is to look at the isotopes that you find within them. Most elements possess several isotopes. These are atoms that have the same number of protons – or sub-atomic particles with a ‘positive’ charge – but a variable amount of neutrons.

Neodymium - a rare earth and a valuable ingredient

In regard to isotopes, Alex is especially interested in a material that is called ‘neodymium’. Neodymium is an element that possess both radioactive and stable isotopes. This combination makes it ideal for studying changes through Earth’s history.

Neodymium is a ‘rare earth’ and a very strong magnet, thus it is widely used in microphones, computer hard disks and wind turbines. “The great thing about neodymium as a stable isotope system is that it has the same composition through time,” Alex says. “In all the rocks I've examined so far, the neodymium isotopes are exactly the same.”

Alex has also created a special neodymium isotope ‘double-spike’ that combines isotope mixtures that were created in a nuclear enrichment facility. “It's $ 25,000 for half a gram,” Alex estimates. But half a gram can go a very long way. “For the experiments, you mix them very precisely. You add a tiny bit of that to each experiment and it can be used to calculate the radiogenic (radioactive) and stable isotopes very precisely.”

In itself, the chemical process to analyse Alex’s rock samples from Western Australia is quite complicated. “I can't just do these measurements right away. I first need to separate whatever I'm interested in. That involves dissolving the sample, and then I do column chemistry,” Alex says.

The impact of the pandemic on research

Even though Alex’s research is based on rock samples that he collected in 2019, and he doesn’t have to travel anywhere to do the research, the pandemic has had a big impact on his project.

“To do my experiments, I need a chamber with no oxygen, an ‘anoxic chamber’. It took six months for the chamber to arrive. Then it's taken another three or four months for the technicians to be able to come and set up the machine,” Alex says. In addition, a PhD student who wanted to work with Alex on the project wasn’t allowed to travel to Townsville, where Alex is based.

But the future is looking a lot brighter now. “I’m planning to be using the new equipment by the end of the year. But there's a lot of little things that need to be set up and prepared to do the experiments,” he says.

So, for the time being, we will have to wait before we can learn more about more detailed findings about when and how the continents emerged. However, Alex is still interested in Honours, Master's and PhD students who are just as passionate as he is to uncover the secrets of our ancient oceans.

Gain a better understanding of surface and deep Earth processes by studying Earth and Environmental Geochemistry. 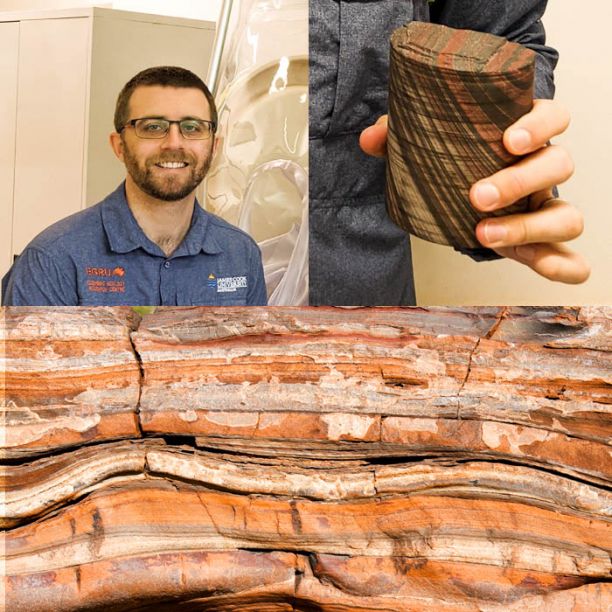 Alex McCoy-West is a DECRA Fellow and lecturer in Earth and Environmental Science at JCU.  Alex’s research focuses on using geochemical tools to understand the processes involved in the formation and evolution of the planets. As a geochemist he specialises in using isotope systematics to gain insights into event that shaped our planets past.