A flight to nowhere

College of Business, Law and Governance

Flying to nowhere in pandemic times

Senior tourism lecturer Dr Denis Tolkach tells us more about what ‘Flights to Nowhere’ are, why some people do stupid things when on holiday and how difficult it is to produce travel research videos for YouTube.

Even though most people weren’t able to travel much in 2020 and 2021 because of the COVID-19 pandemic, they never stopped enjoying travel experiences as such. This is why airlines in countries like Australia and Fiji offered flights that would start and end at the same airport. Fiji, for example, offered a “flight to nowhere” in one of their long-range A350 airplanes on 10 October 2020, and another one in January 2021.

“The context of Fiji is especially interesting because it's a small island nation. Fiji is a country dependent on international tourism. It's a country that is also affected by climate change. After all, Fiji has chaired several climate change international meetings already,” Denis says. “But then, Fijian people themselves fly around the islands for no particular reason for three or four hours.”

This is why Denis and his colleague Professor Stephen Pratt from the University of the South Pacific asked Fijian residents how they felt about going on a flight to nowhere. “Our research found a couple of different reasons,” Denis says. “One was that they wanted to spend quality time with friends and family. Some of the passengers were people who have never been flying before. Others were nostalgic for a flight, because, coming from a small island nation, they used to fly a lot, and so they wanted to experience that again.”

In addition, Fiji Airways is the national carrier of the country, and Fijian residents felt the airline needed their support. “They understood that the company was in trouble,” Denis says, “and flight crews needed the practice as well.”

Tourism in times of climate change

When it comes to justifying ‘flights to nowhere’ in times of climate change, Denis and Stephen’s interviewees offered a number of explanations. “Some didn't think one flight would make a difference in the global scheme of things, which is quite a common justification,” Denis says. “There were also passengers who said that this flight doesn't affect the environment as much, compared to manufacturing or heavy industries, for example.”

Finding a balance between the economic benefits of tourism and the industry’s environmental implications is no easy feat, especially when small island nations like Fiji heavily rely on tourism. “When it comes to the environment and climate change, but also in terms of social issues, there needs to be a good strategy on how to address all of these,” Denis says.

Denis emphasises that a country can’t rely on one economic activity alone. “Even though one might assume tourism academics would be only supporting tourism, we understand these issues exist,” he says. “We would like to see more diversification, more linkages with other industries. Linkages with agriculture is an obvious one because we need to eat as well, and tourists are willing to spend money on good food.”

A remote island country like Fiji is dependent on tourists arriving by airplane.

Why tourists sometimes do stupid things

Tourism is all about people, and sometimes people do stupid things when on holidays. This is also a topic that Denis and his colleague Stephen Pratt have looked into. “We attended a number of conferences and seminars about the concept of smart tourism, where people use technology to resolve problems like over-tourism and overcrowding, for example,” Denis says.

“Then we thought, well, everyone discusses this smartness. But there's something within the human nature that prevents us from acting smart when we should know better.”

When it comes to what stupidity in tourism is, Denis says, “stupidity is behaviour that is detrimental to the actor and also to others. Something that doesn't benefit anybody.”

People tend do stupid things when they go to a place where they don't know the local rules and cultural traditions. “Even if you travel to, let's say, North Queensland from Melbourne or Sydney, you're taken out of your place,” Denis says. “You don’t know how to behave around crocodiles and cassowaries, for example, and that can lead to some unfortunate events.”

Is there 'stupidity in tourism'?

In their paper “Stupidity in tourism”, Denis and Stephen found that there are a number of reasons why people behave differently when on holiday. “People don't feel vulnerable,” Denis says. “They think, ‘oh, I can do anything I want.’ They think they know everything, but they don't. If you think that nothing can affect you, then you think you don’t need to take any precautions.”

But there are other reasons as well: “When you travel away from your usual residence, you don't have your usual social restrictions,” Denis says. “When on holidays, you know that your friends, your family and your employer are not around. In all likelihood, they will never find out what you did.” This leaves the door wide open to some things that people would never dare to do at home.

Denis and Stephen compared Western tourist behaviour with tourists from China and found that there are differences when it comes to how people behave when on overseas holidays. They found that Chinese tourists behave better on holidays than at home nowadays, whereas many  Westerners behave better in their hometown.

“We think that was because, a couple of years ago, the Chinese public became aware of the bad press that they were getting. That was when the government implemented ‘information sessions' to let people know how to behave overseas,” Denis says. “After that, Chinese tourists became more self-conscious about their behaviour.”

However, Denis says that these information sessions probably wouldn’t work with Westerners, especially if they were mandatory. Instead, he suggests that travel guides that people buy before they go on holidays could tell them more about local customs. “It's tricky to inform tourists in the right way. You want to make it entertaining; you don’t want tourist to feel dumb or lecture them,” Denis says. “You need to frame a message in a positive way that helps improve their behaviour.”

Denis and Stephen also started their own YouTube channel, the ‘Travel Professors’, when they were teaching at the same university in Hong Kong in 2016. “One day, Stephen said he had been watching some video bloggers talking about tourism, and he found the information wasn't good enough,” Denis says. “I figured out how to create videos, and that's how our channel started.”

Since 2016, Denis and Stephen have published over 170 videos on their YouTube channel. “We thought there was a lack of examples from different destinations in regard to some issues, and I regularly use videos to show to my students. People react to visual materials, and you can explain some topics more easily,” Denis says.

Denis and Stephen do not only create these videos for their tourism students. “We found that our YouTube channel was quite a useful resource also for the general public, to spread awareness that there is tourism research. Some people don't know that this thing exists at all,” Denis says.

Having their own YouTube channel made the two researchers aware of how much work is involved in creating a single video. “We published a paper about this experience. We have learned to appreciate the skills, time and effort that go into producing such content,” Denis says. “It might look like there are ‘some guys traveling around’ and simply talking into a camera. But the amount of time spent on editing is enormous. Especially getting the sound right, that is the biggest challenge. I’m still learning how to do it.”

Looking into the future, Denis and Stephen are working hard on adding more content to their ‘Travel Professors’ YouTube channel. The latest videos discuss mud baths in Fiji as an example for community tourism as well as film location tourism, where people visit places that were featured in a movie.

Are you interested in tourism research, too? Find out more about study options in tourism at JCU.

Launch yourself into a rewarding and fast-paced career in tourism, hospitality and events 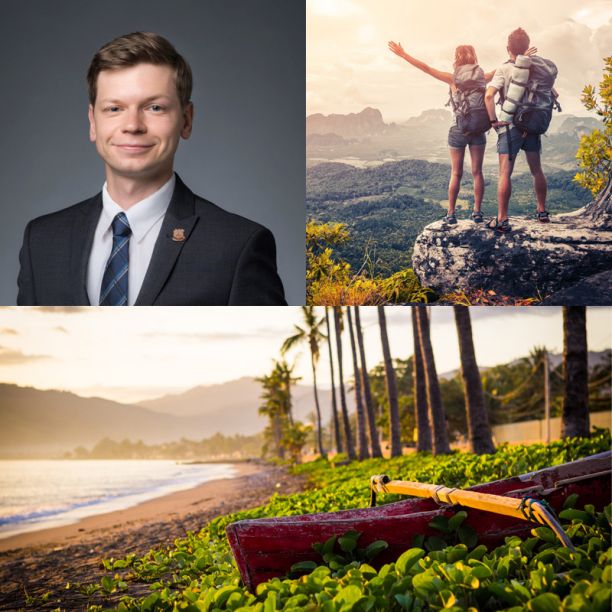