Super prawns of the future

Australian scientists are racing to breed better, stronger ‘super prawns’ to help meet the increasing demand of a global population that’s in serious need of a sustainable protein source.

Imagine a prawn that can grow twice as fast as today’s farmed prawns, and several times as large. It's better for you because it contains higher levels of omega 3, and it’s resistant to disease and sustainable to farm.

And the best part? You could be eating these for Christmas lunch in just five years, because Australian farmers are producing the first generations of selectively bred prawns in a move that’s set to revolutionise the global seafood industry.

Meet the super-prawn – a better, stronger, more efficient prawn that could help shore up the world’s protein supply in the decades to come.

Super prawn to the rescue

That’s a lot of pressure to put on such a small creature, but we’re staring down the reality of the world’s population growing from 7 billion to 9.8 billion by 2050.

That means in the next 30 years, farmers must produce 70% more food to feed the global population. And as the middle class expands in countries such as Brazil, Russia, India, and China, we’re going to see a whole lot more demand for animal-based protein.

"One of the industries that can help supply a large portion of humanity’s future protein needs is aquaculture. It’s the fastest growing primary industry globally,” says Professor Dean Jerry, Director of the ARC Research Hub for Advanced Prawn Breeding and Deputy Director of the Centre for Sustainable Tropical Fisheries and Aquaculture at James Cook University (JCU).

The biggest problem with farming prawns is also its greatest opportunity. Where livestock has benefitted from thousands of years of selective breeding followed by decades of state-of-the-art genetic improvement technologies, seafood has been more or less left as is.

And that’s where researchers from the ARC Research Hub for Advanced Prawn Breeding come in. They’re supercharging the breeding process of the Australian black tiger prawn, the main species of prawn farmed in Australia, to mimic what’s been going on in the agriculture industry for millennia.

"If you want to sum up our project, it’s that in five years, we’re aiming to take the genetic knowledge around black tiger prawn aquaculture, and make it comparable to the level seen in livestock production,” says Professor Jerry.

“People ask if we’re creating a Frankenstein prawn. My response is all we’re doing is what’s been done over thousands of years for livestock. This involves harnessing the potential of the prawn using targeted selective breeding and information hidden within its genome.”

Professor Jerry and his team are using several next-generation sequencing platforms to read the genetic blueprints, or genomes, of tens of thousands of prawns to identify genetic markers that can be targeted for selective breeding.

They’re now using this genomic information to focus on certain traits through selective breeding, such as growth rate, disease tolerance, the colour of the cooked prawn, omega three and fat levels, and stress tolerance.

They’ve also synthesised these genomes into the first-ever comprehensive ‘transcriptome' for the black tiger prawn.

"We’re now developing genomic selection algorithms, and will breed our second generation of animals to see how good these algorithms are at predicting the genetic merit of the prawns in the real world,” says Professor Jerry.

“We've collected genetic information on more than 60,000 prawns, which is likely higher than what anyone else has done in the world."
Professor Dean Jerry, JCU

The JCU team has partnered with the CSIRO, the Australian Genome Research Facility (AGRF), the University of Sydney, and Australia’s largest prawn farming company, Seafarms, to produce a strain of prawn that will be important to the future of the newly launched Project Sea Dragon.

Once completed, this $2 billion venture could see 100,000 tonnes of prawns produced every year in the Northern Territory across 10,000 hectares of aquaculture farmland.

It's set to be the largest single aquaculture development on Earth, and could turn into a billion-dollar export once its super prawn stocks hit the market.

“If you look at selective breeding for growth rate in aquaculture, we get on average 15% improvement per generation. This means in six or seven generations (one prawn generation equals one year), we can double the growth rate,” says Professor Jerry.

“In the beef industry, if a company gets a 1% improvement in the growth rate using the most advanced techniques, they’re cheering. For chickens, it’s about 5%. In aquaculture, the amount of genetic gains we can make in the first generations are extraordinary.”

Of course, future-proofing can be a tough sell. Professor Jerry says that in order for prawn farmers to want to try new methods to shore up our protein stocks, a real change in approaches is needed.

But if anything can convince them that something needs to be done, the looming threat of diseases, such as white spot syndrome virus, which cost Queensland prawn farmers more than $40 million in late 2017, could be the answer.

“But white spot syndrome virus has shown us that the Australian industry is really vulnerable if it continues to rely on wild-caught broodstock, instead of domesticating the species and selectively breeding for important traits, including disease resistance.”

The ultimate goal of the Advanced Prawn Breeding project will be to use comprehensive genetic information to design the most advanced breeding program for an aquaculture species that the world has seen. 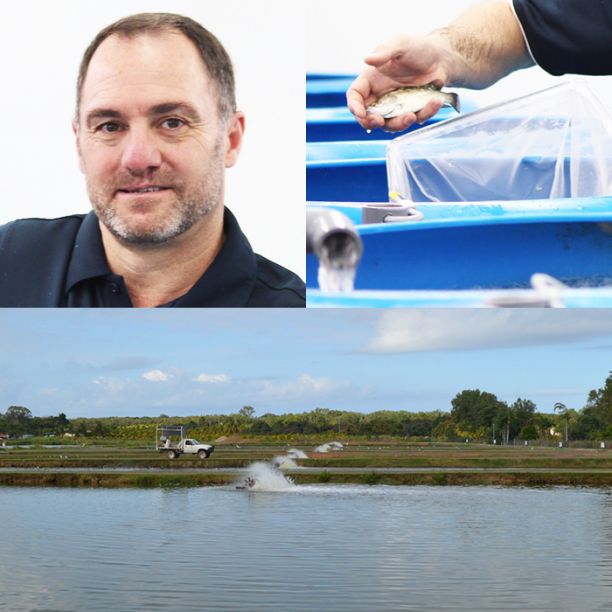 Dean is globally known for his work in aquaculture, with his primary area of research in the application of generic technologies to the improvement of farmed aquatic species. He has worked with over 12 aquaculture species over the last 18 years and over time has built a large, internationally-recognised research team. Dean is also pioneering the application of environmental DNA technologies to the detection of rare and invasive aquatic organisms in Australia, and in the detection of aquaculture pathogens.