Daintree Rainforest Observatory About us

Our field station is available to all scientists, post graduate students, undergraduate classes, Yrs 10-12 High School groups, and anyone wishing to run an educational workshop or conference.  The station is open all year except for public holidays.  Day group visits are possible on weekdays from 8am – 4pm. Groups can participate in station led activities or run their own activity, please contact station staff to discuss your needs on (07) 4098 0005 or email dro@jcu.edu.au.

The Daintree Rainforest is the oldest rainforest in the world; it has the highest biodiversity of any ecosystem in Australia.  It is a magical landscape woven together with unique biota, including numerous living fossils.  A visit to the Daintree Rainforest Observatory is a unique experience, where completely off-grid you can immerse yourself in the wonders of the largest continuous area of tropical rainforest in Australia. 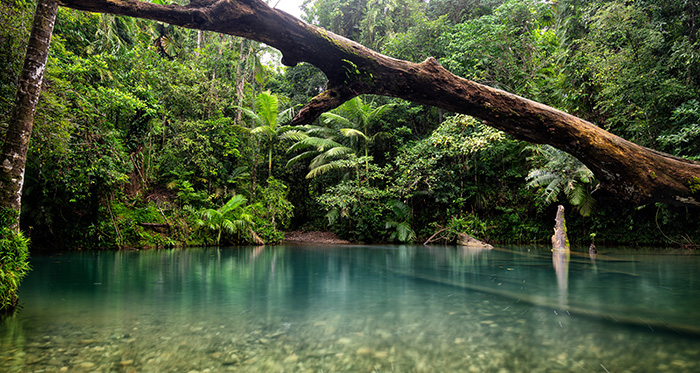 Annual average rainfall is approximately 3500mm (137 inches) and is strongly seasonal, with 70% falling during the wet season which runs from December to April. Summers are often hot and humid, with the mean daily temperature in January around 28°C (82°F). However, temperatures up to 36°C (97°F) are not unusual during the summer months. Winters are mild and dry with the mean daily temperature in July around 22°C (72°F).

Northern Australia is subject to tropical cyclones in the wet season and their occurrence is unpredictable. The impact of these severe tropical storm systems are regarded as a natural phenomenon and a key evolutionary factor in shaping the ecology of Queensland's tropical lowland rainforests.

The vegetation at the Daintree Rainforest Observatory is complex mesophyll vine forest. There are a large range of botanical structural features represented including buttress and spur roots, a tall but irregular canopy with indistinct stratification of sub-canopy (saplings, seedlings, and ground cover layers) and irregular stem diameters. Also prominent on the site are a variety of robust woody lianas, vascular epiphytes, palms (both feather and fan), zingibers and aroids. The canopy is irregular, varying from 25 to 40 metres (82 to 131 feet), with dominant canopy trees belonging to Proteaceae, Meliaceae, Sapindaceae, Apocynaceae, Lauraceae, and Myrtaceae families.