Literature of any people (whether oral or written) is not only the repository of peoples’ wisdom, but it is also a reflection of peoples’ customs, laws, and the ways of perceiving the surrounding world. As a unique expression of human thought, it represents extraordinary socio-cultural conditions in all human societies. Today, with the significant increase of modernisation within societies, oral traditions, alongside the native tongues, are rapidly being lost. This is especially visible in South America, where, as a result of the social discrimination of the minority ethnic groups, many indigenous languages together with peoples’ traditional knowledge, are balancing on the verge of extinction. One of these vanishing voices is Murui, a Witoto indigenous language from the Amazonian rainforest. 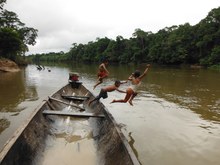 In June 2014, Kasia Wojtylak and Kristian Lupinski were awarded a Firebird Foundation for Anthropological Research Fellowship for the documentation of oral literature among the Murui people in Colombian parts of the Amazon. Kasia is a PhD student in linguistics at the Language and Culture Research Centre (LCRC). She has been studying the Murui language since 2009 and has a substantial knowledge of the Murui culture. Her Research Master thesis dealt with the Murui phonology and verbal morphology (VU University, Amsterdam 2012). Kristian, on the other hand, is a gifted BA student of the Creative Industries program at the James Cook University. He is an aspiring cinematographer with a great deal of experience in media design and film production. The couple is passionate about documenting indigenous languages and cultures. Both Kasia and Kristian are active members of ALTAR (Anthropological Laboratory for Tropical Audio-visual Research). Currently, they are preparing for their fieldwork in Colombia, which will commence in November 2015. 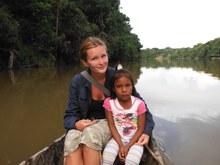 The Oral Literature Project focuses on collecting oral literature of the Murui people. Its aim is to ensure preservation of knowledge and experiences unique to this indigenous group. It concerns mainly the preservation of genres that the Murui communities have identified as urgent to document before they are lost forever: songs, chants, folk tales, myths, spells, epic poems, legends, life story narratives, historical accounts, ecological nomenclature, and narratives of traditional customs and practices. The project incorporates the element of skill development so that the Murui youth can carry on with the documentation of their oral traditions in the future.

The collection of oral literature is not only of great importance for the Murui people, but it is also essential for a good understanding of many cultural phenomena that depend on the direct interrelationship between the Murui society and the surrounding environment (e.g., taxonomies of biological and ecological systems, kin relationships, spatial orientation, and many more). The most important outcome of the project will be a multimedia catalogue titled Oral traditions of the Murui people that will cover all audio-visual materials organized in a sensible way and subtitled in both English and Spanish. It will also contain a series of short educational audio-visual materials for use in schools (e.g., how to build a canoe, how to prepare cassava, etc.). The second major outcome will be the book Murui song poetry (in English), and two small books in Spanish with a selection of song performances and a compilation of selected narratives in Murui. The Murui Oral Literature Collection Project will be completed by early December 2016.

Project updates and documents will be collected here throughout the life of the Project. 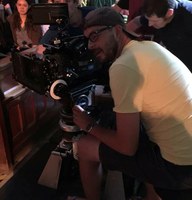