Daniela Vávrová’s PhD project is an audiovisual ethnography in a Sepik community, Papua New Guinea. With the Karawari-speaking Ambonwari and their saying 'Skin has Eyes and Ears', Daniela explores how people shape and are shaped by their social and cultural environment through their sensory experience. Daniela focuses in particular on the visible ‘skin, body’ and invisible ‘insideness, understanding’ as the main domains of people’s lives and the interaction between these domains. She implements audio-visual material into her writings and explores the limits of sensory mediation through the writings and screen. Bård Aaberge’s current project is filming five Dreaming narratives as told and dreamed by Kuku Yalanji elder Roy Gibson at five Dreaming story locations within the Greater Daintree region in Far North Queensland. A DVD will be produced and given to Roy for community use. The audiovisual material also forms a complementary audiovisual part of his PhD thesis as well as a part of larger filming process about the Yalanji traditional knowledge in the past and present. Rosita Henry is employing the methods of visual anthropology to document exchange transactions and other events. Visual media are now an accepted part of anthropological research and vital tools for collaboration with research participants and dissemination of research results. Rosita has already recorded a wealth of film footage on brideprice exchanges and mortuary exchanges that requires editing. She plans to use the facilities provided by the Cairns Institute to produce of an ethnographic film on contemporary cultural transformations in brideprice exchanges and several shorter ethnographic video clips for communication of results to the community and the broader public and as a means for integrating her research into her teaching. Mike Wood is working on a short film about a key mourning ritual among the Kamula people, Papua New Guinea. The ritual uses song and dance to allow for the intense expression of grief and compassion. The resulting video will be used for teaching purposes while other copies will be taken back to Kamula communities. Christiane Falck is currently working on an exhibition about people’s relations with spirits in a Sepik community in Papua New Guinea. Part of the exhibition will be audio-visual material as well as artefacts collected during her PhD fieldwork. Since spirits inhabit an unseen sphere, Christiane is currently experimenting with ways in which audio-visual material can be used to capture the immaterial and can be presented in a way that will help the visitor of the exhibition understand people's lifeworld. The exhibition will further address topics such as 'rituals of life and death', 'people's relations with the dead', and explore how she herself came to be seen as a spirit of the dead. Chiara Bresciani will be documenting relevant elements of cultural heritage of Huave people (also known as Ikoot's or Ikojts), an Indigenous group living in Southern Mexico. This audiovisual material will be part of her PhD project about agency, cultural change, and tradition. - Chiara has been working in this area since her MA in Anthropology.

As a side project, she had collected and elaborated visual materials (videos, pictures) and edited them in a DVD co-authored by fellow anthropologist and friend Marta Iannetti. - “There is an important debate in Anthropology on the objectification of the local culture by the ethnographer, and issues of appropriation, "stealing" and (lack of) reciprocity are particularly significant in post-colonial countries and/or Indigenous contexts”, states Chiara. “Dios mangüy means "thanks" in Huave language, as the DVD has been conceived to acknowledge the contribution of the host community in the research and to partially restitute some of the data collected (pictures, video, information), in a form that is more "material" and accessible than academic writing”.

The DVD is self-produced under a Creative Commons license of CC BY-NC-ND type (Attribution, Non commercial, No derivatives). It features: Jennifer Gabriel is creating a website for her project in Papua New Guinea. It involves an interactive website for world heritage consultation and will draw upon innovative production methods which include the use of circular narrative in website design. One of the techniques that will be explored involves the viewers to temporally find themselves in between a beginning and an end, enabling audiences to have an experience that meets their own needs and perceptions. This will be achieved through setting, theme and dialogue.

Circular narrative in website design involves the transition from a real world to an imagined one, and finally ending back in reality. User Experience as a field in Website creation puts the content and the interface into a familiar framework, allowing visitors dive right into the experience.

Walkabout (Retail) Store is a portrayal of a Polish missionary and his movements between the various settlements in the rainforest of the East Sepik Province of Papua New Guinea. The story reflects upon traditional concepts of exchange and negotiation, disclosing the change-producing elements of religion and commodification. The footage for this audio-visual project was shot by Daniela Vávrová during her year-long fieldwork in the area. She is momentary editing the story together with Kristian Lupinski. Borut Telban, whose anthropological research among the Karawari-speaking people has spanned more than twenty years, will act as consultant. Jennifer Deger is working on a number of film and museum installation projects as part of the new media collective, Miyarrka Media, including 'Christmas Birrimbirr' ('Christmas Spirit') and 'Gapuwiyak Calling'. In her collaborative and experimental media work with Yolngu has co-directed and produced of a number of documentary films including 'Gularri: That Brings Unity' (1997/2011), 'Manapanmirr in Christmas Spirit' (2012), 'Ringtone' (2014) as well as the video artworks 'Christmas with Wawa' and 'My Red Yolngu Heart'. Katarzyna (Kasia) I. Wojtylak (PhD James Cook University) is a Post-doctoral Research at Language and Culture Research Centre (LCRC). Since 2010, she has been working with the Murui people, a Witotoan indigenous group from Northwest Amazonia, focusing on various aspects of their language and culture (such as literature, language contact, and social organization).

Throughout her fieldwork of nine months between 2013 and 2016, Kasia collected numerous audio-visual materials with an intention to create a documentary film about the everyday life of the Murui. This Project was founded by the Firebird Foundation for Anthropological Research, USA. Together with the co-editor of the film, Kristian T. Lupinski, in 2016, she completed the final version the short documentary ‘Murui Filmmakers’. In 2017, she collaborated on the full feature ethnographic film ‘Our Words - A documentary of the Murui of Tercera India’ (filmed and edited by Kristian Lupinski). Kasia has a strong background in linguistic description, language documentation, and ethnographic research. 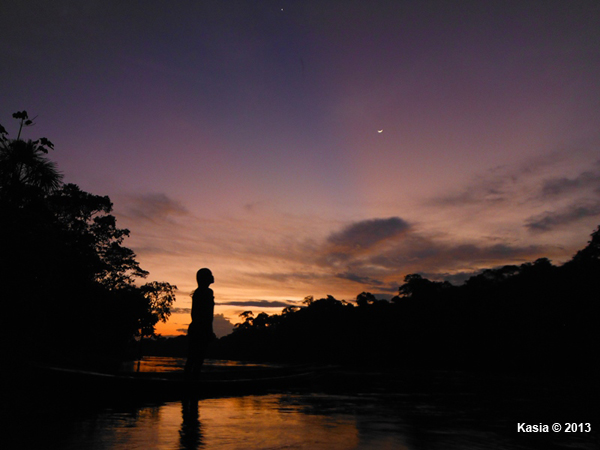 Kristian T. Lupinski (BA Creative Industries (Media Design) James Cook University) is a talented filmmaker, a co-creator of Element Media Production in Cairns. Throughout his life, he has been involved in numerous video and film productions, such as the Little Earth Creatives, Ring of Fire, and Visual Obsession.

Kristian has firmly established himself within the Cairns cultural community since his arrival in 2011. He has performed in various professional and community theatre shows and commercials on terrestrial television. In 2015 he undertook a field trip to Northwest Amazonia with Dr Kasia Wojtylak. Together, they collected materials for the Murui Oral Literature audio-visual project (funded by Firebird Foundation for Anthropological Research) that focused on the culture of the Murui people.

He was also working with Daniela Vávrová on her film project about a Polish priest in Papua New Guinea. His short documentary film ‘Murui Filmmakers’ appeared in a number of film festivals, including the Understory Film Festival in Cairns in 2016. The full feature ethnographic film ‘Our Words - A documentary of the Murui of Tercera India’ was completed in December 2017, and is currently being in post-production. 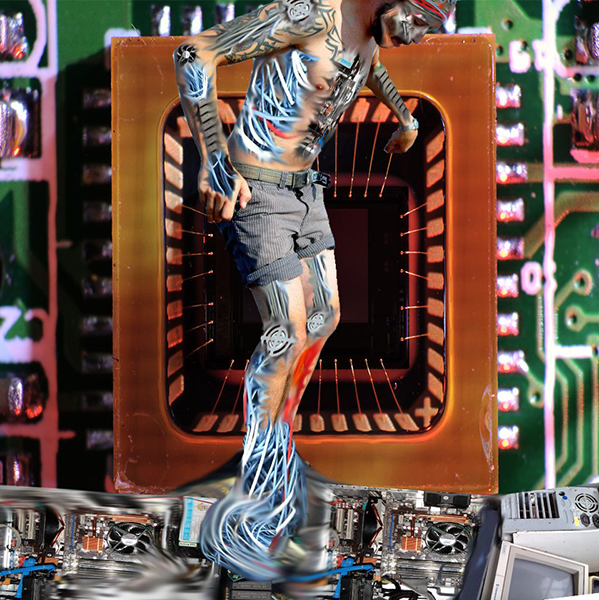 Seraeah Wyles began filming with an idea of creating a series of films that showcase the importance of learning and sharing cultural knowledge within her traditional owner group ‘Girramay’ on her father’s lineage.

Her current project with the assistance of ABC Open was to create a short film ‘Going home to Girramay’ - showcasing the importance of making your connection to country, family and culture as well as the importance of also finding alternative ways to record cultural knowledge to share with future generations and also to inform the wider community of the roles and responsibilities that exist within each traditional owner group and how to rightfully respect one’s cultural country. This short film has won the prize for the best James Cook University Aboriginal and/or Torres Strait Islander Film Maker award at The Understory Film Festival, held on 19 July 2014. Melusine Martin’s PhD research focuses on nature perceptions in the digital age. She is currently working on a film documenting her fieldwork and research process throughout her PhD. The film will serve two main objectives. The first one will be to share how millennials relate to the natural world and how the use of technology improves and/or prevents resulting feelings of connectedness, wellbeing and belonging. The second objective will be to understand the importance of visual images in analysing our representations of nature in the digital age. In this respect, filming will be a relevant tool in the context of a digital media analysis (including social online media, Internet, daily use of mobile phones, tablets, etc.) as using a camera and then screening the resulting documentary will reflect back to our own addiction to technology.

The film aims to provide a new idea of nature based on a critic of western culture characterized by the human/nature dualism and to examine the nature-deficit disorder and its direct impact on our wellbeing. Melusine Martin has also directed a short-film about her research, entitled Nature, which was selected for the scientific Short-Film Festival ‘Les Chercheurs Font Leur Cinéma’ and screened at the Cité de la Science in Paris (November 2016). She is a Postgraduate Research Fellow at The Cairns Institute.