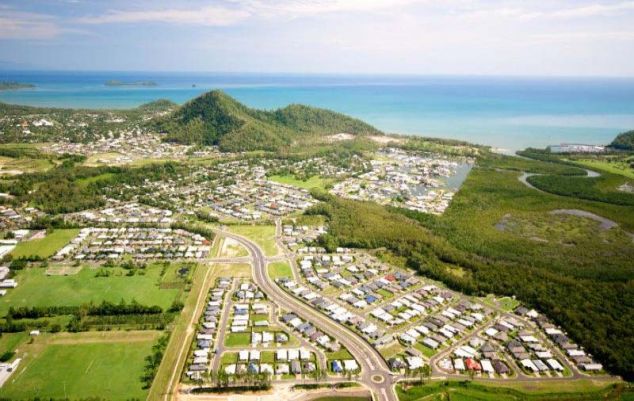 Smithfield Village is a sustainable master planned community within the existing community of Smithfield, Cairns. The project is one of Cairns’s largest master planned communities to date. It incorporates 1300 residential lots released over 38 stages with mixed land use, open space recreation and environmental parks. The main sustainability feature of the Village is the Water Sensitive Urban Design (WSUD).

The key feature of the project is the use of bio-retention basins and stormwater treatment trains to treat stormwater before it enters the Great Barrier Reef Marine Park. They are the first of their kind to be installed in the wet tropics of Australia. With an annual rainfall of over 2,000mm and the volumes and intensity of the storm events in the tropics, the bio-retention basins is helping provide a benchmark for future stormwater management practices in Cairns. The Gross Pollutant Trap (GPT) capturing off-site water entering into the Village was the largest installed in Cairns at the time, constructed in Brisbane and transported to Cairns. The development includes a reticulated grey water system to save an estimated 130M litres of water per annum and a Vacuum Sewerage system to avoid additional infrastructure, running costs and deep excavation. The sewer has been laid in the road reserve after much negotiation with council and this resulted in 25% fewer manholes.

All houses have optic fibre connected to enable fast internet. It is the first Telstra Smart community in Cairns.

The project gives residents the opportunity to be less car dependant and the design connects people to open space with an extensive network of footpaths to local amenities, the Cattana Wetlands and upland rainforest walks.

The design of the development has also considered applied passive solar principles to the urban form, in particular focusing on capturing cooling south easterly breezes. The street layout has had careful consideration and planned to provide residents easy access to open space (most residents have open space at the end of their street).

With the assistance and input of both Cardno and Aurecon, Brazier Motti were able to develop a Master Plan for the development of the site that not only produced a satisfactory yield, but also preserved the bulk of the existing remnant vegetation and provided a lineal open space network sufficient to create a habitat link the full length of the site and a number of transectional corridors through the site.

None of this would have been possible without the extensive negotiations all three consultants undertook with all levels of government to be able to generate solutions for the site. This was particularly difficult where cross-jurisdictional issues arose. As an example, there was a need to demonstrate to both EPA and DNR that the mapped location of the highest astronomical tide (HAT) was clearly far outside the western most extent of marine vegetation. Without this result, acknowledging the actual HAT, substantial development land would have been lost and the ability to achieve some of the positive outcomes for the site would have been jeopardized.

Ongoing water quality monitoring completed a research grant funded study during 2010. This has helped to create  a body of knowledge that will assist Council and the local development industry to create even better bio-retention basins, and do so in a more cost effective and timely manner.

Ongoing management is provided through a Community Development Officer who is responsible for welcoming new residents, undertaking community based events, producing regular newsletters and providing a conduit for resident’s issues and ideas.

Smithfield Village is located on an abandoned cane field on the fringe of the Barron Delta Flood Plain. It is adjacent to the sensitive environments of the Cattana Wetlands, the Half Moon Creek Declared Fish Habitat Area and the Trinity Inlet/Marlin Coast Marine Park which now forms part of the Great Barrier Reef Coast Marine Park. To the west the World Heritage listed Wet Tropic rainforests are within walking distance.

The site was of a largely disturbed nature, with the majority of the land being old cane farmland, however, the site contained 10 distinct vegetation communities not including the existing farmland. One species (Myrmecodia beccarii or ‘Ant Plant’) was listed as vulnerable, pursuant to the Commonwealth’s EPBC Act and Queensland’s Nature Conservation Act, and was identified to be preserved with significant buffers from development. The project has also preserved the bulk of any existing remnant vegetation.

A number of disturbed drainage channels, overland drainage paths, a freshwater wetland, tidal fringes and Cattana Wetlands were found on the site.

One third of the site was retained as open space.

Hydraulic flood modelling was used to inform the master plan design. The earthworks model had to be run through Cairns Regional Council’s MIKE 21 two dimensional hydraulic flood modelling process – developed and operated by Aurecon’s Brisbane Hydraulics Group. Close work within Aurecon resulted in an optimised design that avoided impacting adversely upon adjoining developed areas, and in some cases, reducing the potential magnitude of some the downstream inundation in a 100 Year ARI flood event.

Satterley designed all of the home sites to grade up from the road reserve to provide an elevated outlook. This further assisted flood immunity. While the lowest level provides 100 Year ARI immunity, the building pad level typically provides an average of between 150mm and 300mm additional clearance, which equates to a substantially larger flood event.

The project was predominantly designed based on a modified grid road network. Incorporating lineal open spaces creates a unique opportunity for both maintaining vegetation and wildlife corridors and creating an urban environment that gives most residents a direct relationship to public open spaces. These corridors also form a strategic and integral part of the overall drainage network and the stormwater treatment.

The subdivision provides the opportunity for a micro Transport Oriented Design (TOD) heart to the development, and the new extension of Smithfield Village Drive will provide long awaited relief for traffic congestion around the two adjoining schools.

Smithfield Village is promoted as an active community. Residents have the opportunity to be less car dependant as it is located within walking distance of primary and secondary schools, James Cook University, medical and day care facilities, local and regional shopping as well as local employment. The extensive network of footpaths also connects one third of the site retained as open space, the World Heritage listed Wet Tropic rainforests and Catana Wetlands (all in walking distance).

As around 1200 homes will ultimately be connected to the system, it is possibly the largest regional implementation of such a scheme in Australia. Ultimately the purple pipe system will save around 130 million litres of water per annum.

As another first for the Cairns community, all residents have optic fibre connected to their home, providing high speed internet. Free to air digital TV is also broadcast over optic fibre, resulting in no need for TV antennas.

A Rocla CleansAll CL1200 Gross Pollutant Trap was used, at nearly 6 m long and almost 5 m deep.  Constructed in Brisbane and transported to Cairns, it was the largest installed in Cairns at the time.

25% less manholes are needed by constructing sewers in the road reserve as opposed to the rear of properties. The savings on infrastructure will reduce Council running costs and also provides benefits in terms of removing easement constraints within the property and reducing possibilities for infiltration. While sewers in road reserves are not unique in Australia, it was for CairnsWater at the time.

Due to the very flat nature of the site and high water tables, vacuum sewerage was installed from Stage 9.  Vacuum sewerage is installed in small pipes at shallow depths and only one pump station is required to service the remainder of the estate, rather than 4 traditional gravity stations. The quality of the sewerage delivered to the wastewater treatment plant is very high due to the high speed agitation and aeration that occurs during its transport. The reduced treatment costs would more than offset any increase in operation and running costs.

The design of the development has also considered applied passive solar principles to the urban form, in particular focusing on capturing cooling south easterly breezes.

A Neohlis streetlight system that is solar and wind turbine powered has been installed.

The project has established the first bio-retention basins in a Wet Tropics environment in Australia, where stormwater is organically treated to remove any potential stormwater pollutants prior to discharging into the Great Barrier Reef Marine Park. Smithfield Village was awarded Engineering Project of the Year 2007 Cairns for its work in this regard. With an annual rainfall of more than 2,000mm – which comes in high volumes and intensities during storm events – the bio-retention basins provide a benchmark for all future stormwater management practices in Cairns.

The basins have been developed to emulate natural wetlands and in excess of 10,000 plants have been installed. Considerable time was dedicated to designing, specifying, establishing and grooming the manmade wetlands. The process revealed interesting results on the success or otherwise of various plant species.  As this were a first in Cairns, Satterley undertook a two year maintenance responsibility for them before handing the wetlands over to Council.

As the most downstream developable area of the upstream catchment, Smithfield Village is the receiving area for in excess of 30 ha of off-site stormwater from surrounding developed areas. This stormwater run-off is directed through a system of pipes and manholes with overflow weirs that allow the first flush flows to pass through to gross pollutant traps (GPT) before entering the bio-retention basin.

Taking advantage of Cairns Regional Council’s $190 million Cleaner Seas programme, reticulated recycled water pipes have been installed, which will ultimately save an estimated 130 million litres of water per annum. At the time, this feature was two years in advance of Cairns Regional Council’s (Council’s) upgraded treatment plants, delivering A+ recycled water. Changing the open space and road reserve watering to a non-potable source will be as simple as disconnecting and reconnecting water meters as an irrigation ‘ring main’ has been installed during the construction of stages 1-4. Around 1200 homes will ultimately be connected to the system and as such it is one of the largest regional implementations of such a scheme in Australia.

The project challenged Council’s requirements for sewers in the rear of lots by demonstrating significant infrastructure cost savings by installing at the front of lots. This resulted in 25% fewer manholes. A vacuum sewer has been introduced, due to the flat nature of the site and high water table, which will result in far less excavation, a better quality effluent product and will reduce running costs with the need to maintain only one facility instead of four. An architecturally pleasing sewerage pump station has been designed.

Smithfield Village has enjoyed a considerable market share of land sales since commencing, attracting more than its proportion of the overall market.