About JCU JCU Motto and Coat of Arms

Where there is knowledge to be found and shared, there is light that will continue to increase through the ones who are committed to sharing it. 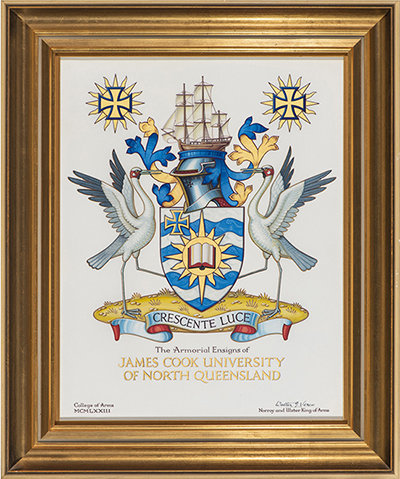 The armorial emblem of James Cook University were granted in 1972. The design represents elements that are integral to JCU. The blue and gold represent not just the sun and sea; the gold is taken from the Sun in Splendour, which is prominent on the shield, and the blue is taken from the Cross formy Azure, which sits in the top left-hand corner of the shield.

The ship is an artistic depiction of Captain James Cook’s ship ‘Endeavour’ at full sail. The Brolgas that flank the shield with spread wings represent JCU’s supporters, past and present, whose investments elevate the university’s ability and achievements. The open book displayed on the shield is the knowledge that JCU seeks to both discover and share.

The shield, ship, and Brolgas stand upon sandy ground and the university’s motto: crescent luce, “light ever increasing”, which is an ideal that JCU seeks to uphold.