The Far North Queensland Hospital Foundation has significantly increased its support of research in 2019 and is announcing one grant of $50,000 (which can be conducted over two years), two grants of $25,000 each, and one donor-funded grant of $10,000. Individual grants of up to $5000 are also available.

The grants are awarded annually. The application deadline is November 17, 2019.

The Commonwealth Fund invites promising mid-career professionals - government policymakers, academic researchers, clinical leaders, hospital and insurance managers, and journalists from Australia, France, Germany, the Netherlands, New Zealand, Norway, and the United Kingdom - to apply for an opportunity to spend up to 12 months in the United States as a Harkness Fellow in Health Care Policy and Practice.

Fellows work with leading U.S. experts to study health care delivery reforms and critical issues on the health policy agenda in both the U.S. and their home countries. A rich program of seminars organised by the Fund throughout the year further enhances the fellowship experience. The Harkness Fellowship awards up to US $130,000 in support, with an additional family allowance (approximately $60,000 for partner and two children up to age 18).

The Fellowship is awarded annually by the Commonwealth Fund. Deadline for applications from Australia is September 5, 2017.

Congratulations to Dr Michelle Redman-MacLaren and Dr David MacLaren. These two researchers were recently presented with the "Distinguished Friends of Pacific Adventist University" award by the Vice Chancellor during the graduation ceremony. 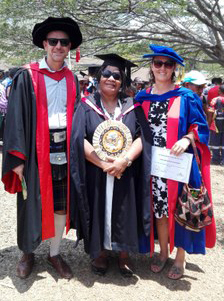 The Anton Breinl Research Centre for Health Systems Strengthening, AITHM, held its launch on the 11th August 2015, at the conclusion of the first day of the Leaders in Indigenous Medical Education Conference.

Building on JCU strengths in rural and Indigenous health research, the Centre has a focus on working in partnership to make health systems work better for people in the tropics, with a particular focus on Aboriginal peoples and Torres Strait Islanders, rural and remote populations and our near tropical neighbours.

Centre Co-Directors Professor Sarah Larkins and Professor Jacinta Elston spoke about the research priorities of the Centre, including the use of telehealth and m-health technologies, building a ‘fit-for-purpose’ health workforce for the region and strengthening processes for needs based heath service planning.

Attendees were entertained by the didgeridoo playing of local man Jai Cummings and enjoyed refreshments under the trees in the Townsville health precinct courtyard.

What is social accountability in health professional education anyway?

The Training for Health Equity Network (THEnet) is an international collaboration of eleven schools of medicine and health sciences with a shared dedication to improving health equity through socially accountable health professional education. The College of Medicine and Dentistry at James Cook University is a founding member of THEnet. Watch JCU and THEnet's Social Accountability video to find out more about what socially accountable health professional education is, and how JCU and THEnet are improving health inequity in our region, and worldwide.

New research from James Cook University reveals farmers and pastoralists are confused about quad bike safety, while most manufacturers are resistant to adding safety features to their bikes.

It comes after quads this year officially surpassed tractors as the most dangerous piece of farm equipment, with the majority of fatalities from crush injuries or asphyxia after bikes rolled on riders.

A study from JCU’s Mt Isa Centre for Rural and Remote Health and College of Public Health, Medical and Veterinary Science led by Professor Sabina Knight and Associate Professor Richard Franklin, has found many farmers don’t know who to ask about the dangers of the bikes or how to lessen them.... Read more

Research paper: Why Quad Bike Safety is a Wicked Problem: An Exploratory Study of Attitudes, Perceptions, and Occupational Use of Quad Bikes in Northern Queensland, Australia.

Triathlon with a tropical twist

Eight James Cook University Sport and Exercise Science students will head to the Solomon Islands this month to learn about a South Pacific-style triathlon where bikes are swapped for dugout canoes.

Sport and Exercise Science Senior Lecturer Glen Deakin said the students from the Cairns and Townsville campuses  leave on November 29 for the two-week trip which includes a short stint at the Atoifi Hospital/College of Nursing before heading to the remote villages of Ambitona and Na’au on the island of Malaita.

"The students will learn how local villagers run a South Pacific-style triathlon and then conduct training sessions on swimming techniques, exercises for paddling and techniques for endurance development," he said.... read more