College of Medicine and Dentistry The sport in dentistry

The sport in dentistry 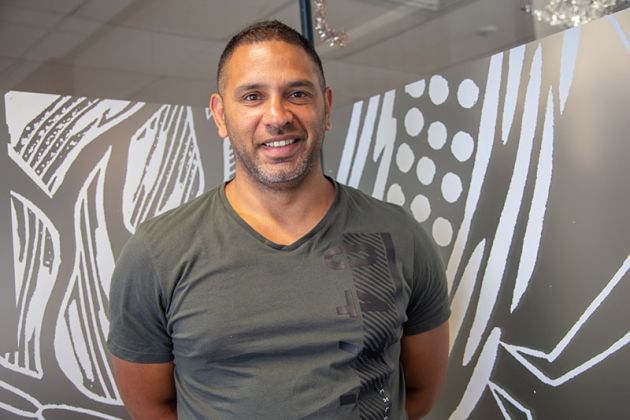 For Nickalus Asera Saveka graduating from JCU’s Bachelor of Dental Surgery course is something he still can’t quite believe he has achieved.

Hailing from both Murray (Mer) and Moa Islands in the Torres Strait and growing up in Cairns, Nick never thought he would even make it to university.

“In high school years there was no interest in going to uni at all.  I was more focused on sports than any school work, so I never really applied myself,” Nick said.

“It wasn’t until I was about 28 that I did some certificates in fitness that sparked my interest to study further. I went to JCU initially to study sports science and did a year of that, and then was thinking of changing to physiotherapy, but then….”

It was with the encouragement of a couple of student tutors who Nick was getting help from, and who themselves were studying dentistry, that made him start to think that perhaps dentistry might be the career he was looking for.

“It took me a little while to think about it, as wanting to be a dentist was never my intention at all, ever...But I applied, and I got accepted.”

“No-one in my family had done anything like this. We were mostly encouraged to just start work as soon as we could after leaving school, rather than setting yourself up for the long term future.”

Getting to the finish line of the dentistry course has not been an easy task, but Nick has achieved it thanks in part to the discipline and focus that his early career in playing competitive rugby league has instilled in him.

“I have this determination in myself. If I start something off, I really get into it. It’s the same with sports. I was really competitive with myself, and that inner drive is key,” Nick said.

However, having such a strong focus on success can be a downfall when things are not going as well as you would like. Which is what happened to Nick in his first year of dentistry studies, failing a subject which held up his progression into second year.

“I was so disappointed in myself, I didn't want to talk to anyone, I was ready to quit.”

“I’ve always had a thing to perform well and I put a lot of pressure on myself if I don't do something properly. It was the same as when I played a bad game of footy and I would feel so angry, it would eat me up.”

Fortunately Nick was able to pick himself up and keep on going with his studies, and has never looked back.

“I knew what I had to do, I just had to get over the disappointment that was all.”

“Failing that one subject was good in a way as it taught me to be mature and how to deal with setbacks. When I was younger if things didn’t go my way I would act terribly.”

There were also other challenges along the way which Nick had to manage in order to stay on track.

“For the first two years at uni I didn't have a car and no internet or computer at home. I would catch the bus at 7am and wouldn't leave there sometimes until 10.30pm or 11pm at night.”

“By the end of second year, I had burnt myself out from studying, so I started asking for help and finding others to study with. I didn't do that before. I thought you had to just do everything on your own and that was it.”

Meeting other Aboriginal and Torres Strait Islander students and asking for support from the JCU’s Indigenous Education Centre also had a positive impact on Nick’s student journey, including with scholarship applications.

“I managed to get a few scholarships with their support, and with that I bought a car, a computer and paid for my clinical uniforms.”

Nick is now about to graduate as one of only a handful of dentists in Australia with either an Aboriginal or Torres Strait Islander background.

It is still such a rarity  that even when Nick was undertaking his fifth year student placement in the public dental clinic on Thursday Island, the locals assumed he was of Indian descent and did not believe that he could be one of their own.

“I would talk to them in their Creole dialect, a type of pidjin English, and they would look at me with surprise, and still not even register that I was a Torres Strait Islander.”

“They had never seen anyone of their kind as a dentist before. I felt it was a big thing going back there to work as a student dentist.”

Despite having many tough moments along the way and taking a total of seven years to finally complete his studies in dentistry, Nick is a firm believer of setting no limits and always challenging yourself.

“I have a natural inclination to be challenged. The harder you have to work at something to do it, the longer it will stick with you”.

Nick’s general advice for other Aboriginal and Torres Strait Islanders thinking of doing further studies, is to always believe in yourself. And to feel the fear and do it anyway.

“We have to change our way of not aiming for anything higher, because we think we’re not smart enough.  I was never smart at school either, but it’s just that thinking.”

“I almost woke up and didn’t go to uni on my first day.  I was so anxious that everyone was going to be like those A-list students. I started questioning myself if I was doing the right thing. But you get over that.”

“The hardest part is starting, getting out of bed, going to uni and showing up.”

As for the future, Nick is keen to utilise his competitive rugby league spirit to be the best dentist he can be.

“I just want to get so much experience working as a dentist that I make it one day to the pro-league. I want to play in the Broncos league of dentists!”