College of Medicine and Dentistry No place like home 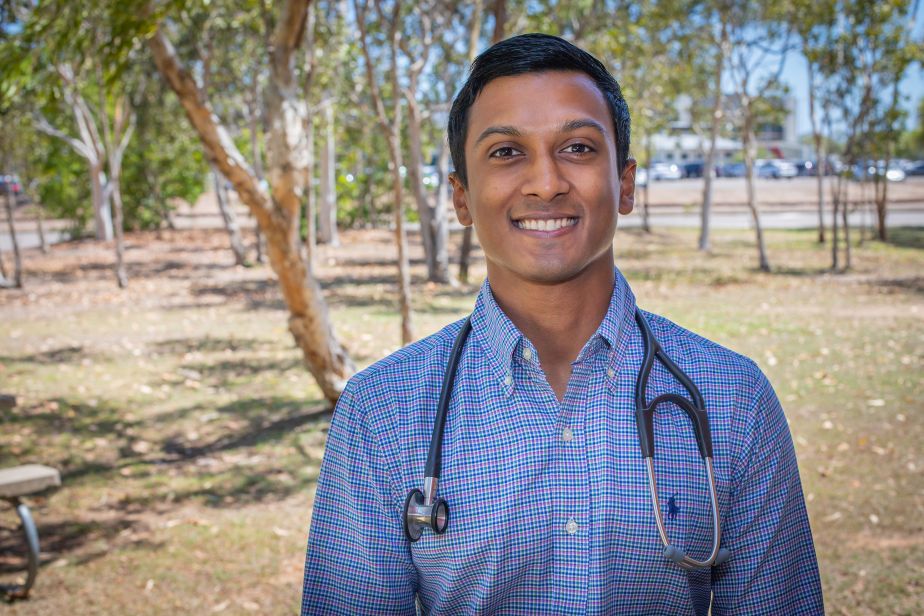 While new graduates often face uncertainty heading into their first job, Dr Romesh Rathnayake knows he is exactly where he wants to be... starting his intern year as a junior doctor at the Townsville University Hospital (TUH).

The James Cook University (JCU) medicine graduate moved to Townsville as a nine-year-old. The northern city captured his heart right from the start, and he has called it home ever since.

After six years of medical school and many clinical placements at the TUH, joining the ranks of the Hospital’s doctors has long been his goal.

“We do a lot of placements at Townsville University Hospital. I’ve spent much of the past three years there as a student and my familiarity with the hospital will help as an intern. I have a lot of friends who are also staying in Townsville, so there was no question of me choosing TUH as number one.”

He believes the training opportunities for junior doctors in Townsville are second to none.

“I already know some of the registrars, and the consultants are amazing at teaching. Hopefully, I will get to work with them and absorb some of their knowledge.”

The former Townsville Grammar School Captain admits there was a certain amount of sibling rivalry that initially drew him to medicine.

“I had two older brothers and they were my role models. I would copy what they did and then try to do it better,” Dr Rathnayake said with a laugh.

“I watched them go through JCU medicine and saw them having a good time so decided that was for me.”

But brotherly competition didn’t drive him for long. Once he started getting hands-on clinical experience he knew he’d found his true passion.

“Something just clicked and I fell in love with medicine,” he said. “I can’t wait to develop further and see what the future holds for me from a professional standpoint.”

He admits the University’s emphasis on early exposure to clinical training had a significant impact.

“You can do the theory and read a book, but then you go and apply that learning to a patient and you can help them. That’s something really positive and very cool.”

“It’s also the detective work, where people are trying to figure out what is going on. You can contribute your opinion and help work out what is happening. Going from textbook to application is a cool progression.”

Dr Rathnayake found the relationships he developed with patients also fuelled his love of the profession. Particularly those made on his rural placements, including his sixth-year placement in the coastal town of Sarina.

“That was probably my favourite. I was there for ten weeks and had a lot of patients on the ward. Some of whom where there the whole time I was. I made some amazing relationships. One patient gave me a birthday card, another got a farewell card for me when I was leaving. It hit me just how much of an impact you can have on a patient while still a medical student,” he said.

“The progression of your knowledge and skills is also very substantial once you get to your sixth year. By then you should be functioning as an intern and really getting your hands in and working during your rural placement. It was such a great team in Sarina, they wanted me to help and that gave me a big breath of confidence for the future.”

Whichever direction that future takes him, Dr Rathnayake hopes it will ultimately keep him where his heart is.

“Even in High School I always knew I wanted to end up here in Townsville. I’ve done my fair share of travelling, but when I go away I can’t wait to get back home,” he said.

“Townsville has given me so much. The best way I can give back to the community is as a medical doctor. I’m definitely going to end up a consultant here one day.”