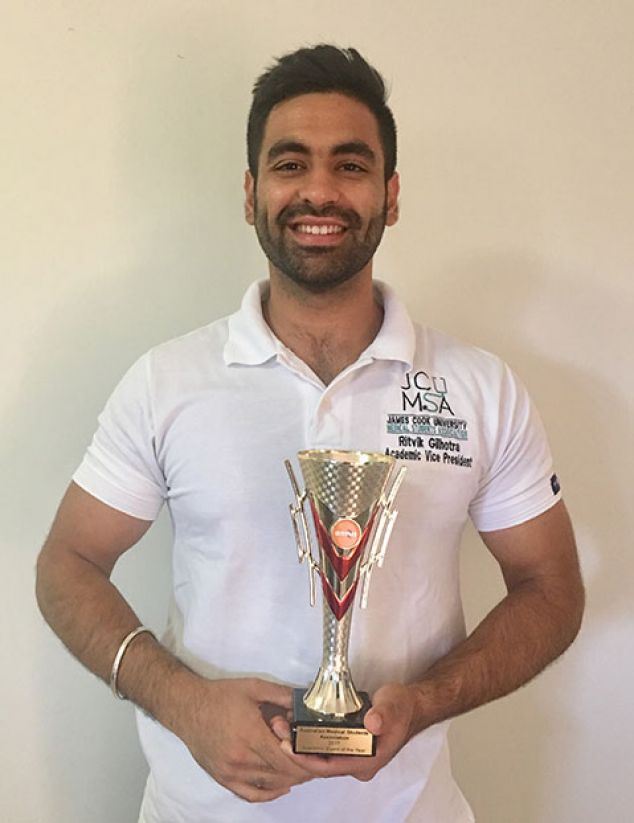 They were recognised for their hugely successful student-led vaccination drive, which delivered flu vaccines to more than 120 medical students in Townsville and Cairns.

The first-time campaign provided medical students with an invaluable training experience, as they administered vaccines to fellow students under the supervision of qualified doctors from JCU Health (Townsville) and the Central Plaza Doctors (Cairns).

Ritvik Gilhotra, a sixth year medical student based in Cairns, is the Academic Vice President of JCUMSA. He said the group were extremely proud of the campaign and were honoured to receive the award.

“We saw a real need, and I think that is why this project was such a success,” he said.“The vaccination drive was the first of its kind in Australia, being a student organised and run event where our medical students had access to influenza vaccinations at cost price right at their doorstep.

“Students are not eligible for the free flu vaccination through QLD Health and I found this peculiar given how involved clinical students are in the hospital. It made me realise that this is a potential area of improvement within the medical workforce to minimize the impact of the influenza virus, on both students and the patients they interact with.”

Ritvik said the student association discussed their idea with JCU’s College of Medicine and Dentistry Clinical Studies Committee. The Committee supported the idea and helped the group with implement their idea.

“We faced a number of challenges. The most important factor we had to address was that our initiative should be medico-legally appropriate as well as keeping the safety of the students being vaccinated in mind.

Not only did this make sure that the clinics were up to the Australian health standards, it also ensured the safety of our medical students whilst being administered with the vaccinations.”

Professor Tarun Sen Gupta, Director of Medical Education at JCU's College of Medicine and Dentistry, said he was impressed by this student-led initiative and was delighted to hear they had received the prestigious award.

“Everyone in the community should make sure their vaccinations are up-to-date,” he said. “This is really important for health care workers and students who come into contact with many members of the public.

“I congratulate Ritvik and JCUMSA on taking the lead in this important initiative, which I hope will be adopted nationally,” said Professor Sen Gupta.

Ritvik said JCUMSA are already planning the 2018 vaccination drive, and expect it will be even more popular than the 2017 campaign.