The Foundation for Australian Literary Studies aims to foster the study and appreciation of Australian literature. The Foundation is funded through the generosity of the late Professor Colin Roderick CBE [27 July 1911 - 16 June 2000] and his wife, Mrs Margaret Roderick [4 March 1922 – 4 October 2020], as well as donations and membership from the general public.

The Foundation is a registered not-for-profit that offers memberships as well as accepts donations from members and supporters. Contributions are actively sought from lovers of Australian literature throughout Australia.

The Foundation is governed by a board of directors and is based at James Cook University, Townsville.

History of the Foundation

The Foundation was formally established on 18th July 1966 amidst messages of support from leading figures in Australian literary and academic fields. Sir Stephen Roberts, Vice Chancellor of the University of Sydney, described the formation of the Foundation as "a major educational achievement".

The Vice Chancellor of the University of Queensland, Sir Fred Schonell, saw it as "a means of charting the past, vitalizing the present, and influencing the future for the increasing number of Australians seeking a literary conscience".

Colin Roderick was a writer, editor, academic and educator. He is perhaps best remembered for promoting the study of Australian literature (at a time when it attracted little academic interest), and also for his biographical and critical studies of Henry Lawson.

Roderick was educated at Bundaberg State School, and gained a BA in 1936, via the University of Queensland's external studies program, whilst working as a school teacher. He then went on to obtain a BEd, and following a brief period in the Australian Army, a MA and MEd, and some years later, a PhD (conferred by The University of Queensland in 1954, for a dissertation on Rosa Praed). After World War II, Roderick took up a position with Sydney publisher Angus and Robertson, where he remained until the 1960s, eventually becoming editor-in-chief of the firm's educational division.

In 1965 Roderick was appointed Professor of English at the later-named James Cook University, Townsville, where he became an energetic teacher. He started the Foundation for Australian Literary Studies, as well as inaugurating a lecture series and an annual book award (both of which were subsequently named in his honour). Following retirement from James Cook University in 1976, Roderick continued his research and writing, producing authoritative biographies of Miles Franklin, Banjo Patterson, and the explorer Ludwig Leichhardt. As Emeritus Professor he also continued his occasional lectures on Australian literature at European universities (he spoke French, German and Italian).

The National Library of Australia holds a significant collection of Roderick's papers in its manuscripts collection.

In April 2021 James Cook University recognised Mrs Margaret Roderick's outstanding work in and support for the development of Australian literary studies with a posthumous award of Honorary Doctor of the University.

Mrs Margaret Roderick was a central and defining figure in the development of the Foundation of Australian Literary Studies at James Cook University in 1966 – then a College of the University of Queensland – and the annual Colin Roderick Literary Award, founded in 1967.

One of the most prestigious and longest extant literary prizes in the country, the $20,000 Roderick Literary Award is presented each year by the Foundation of Australian Literary Studies through James Cook University, and recognises the best original book, in the judges’ opinion, that is published in Australia in the previous calendar year. Mrs Roderick was instrumental in establishing the Colin Roderick Literary Award and organised the annual Awards Dinner over many years. Dr Roderick was appointed Vice Patron of the Foundation of Australian Literary Studies in 2000, the Patron being the Governor General. A key component of the Foundation’s work continues to be to bridge the gap between “the Gown and the Town” in the form of annual public lectures and a suite of other activities, of which the Roderick Literary Award has been a key feature and one of the most anticipated events in the cultural calendar of the University.

The Foundation recognises with thanks the contributions made by the following people to the study of Australian literary studies:

In 2009 she graduated as a Master of Arts (Writing) from James Cook University in Townsville and although she hopes to complete a PhD in Social History is having a hard time finding a university willing to back a humorous thesis. 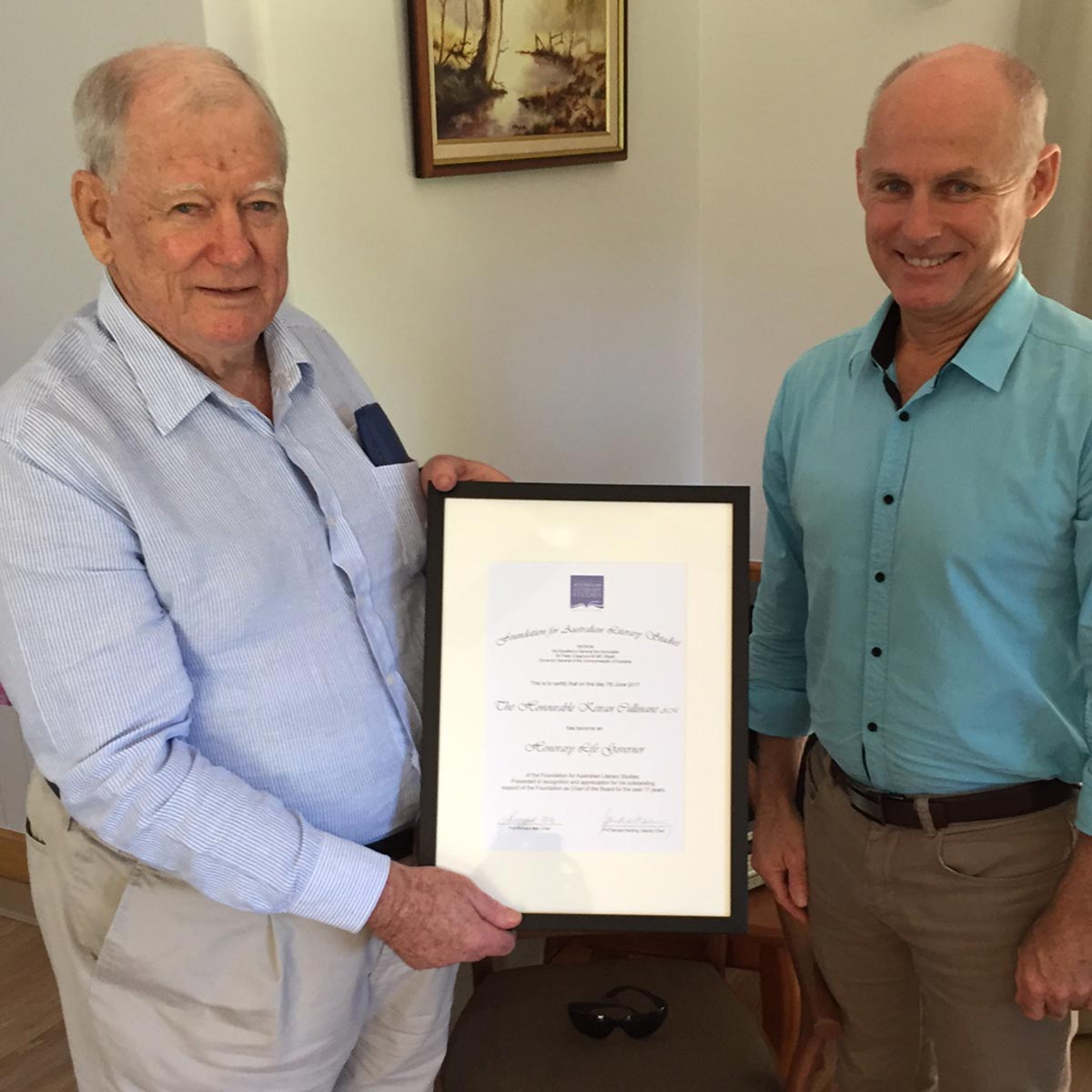 Justice Cullinane was appointed to the Supreme Court on 16th November 1992 following a highly successful 26 year career at the bar, for the last decade as the first Queen’s Counsel to be appointed outside Brisbane.

His community contribution has embraced substantial commitment to James Cook University, serving on its Council, and acting as honorary lecturer in comparative law, contributions which led to the conferral by the University of an honorary Doctorate of Laws in the year 2007.

His Honour’s judicial and other community contributions were appropriately recognized by the nation in 2009, with his admission to the Order of Australia. 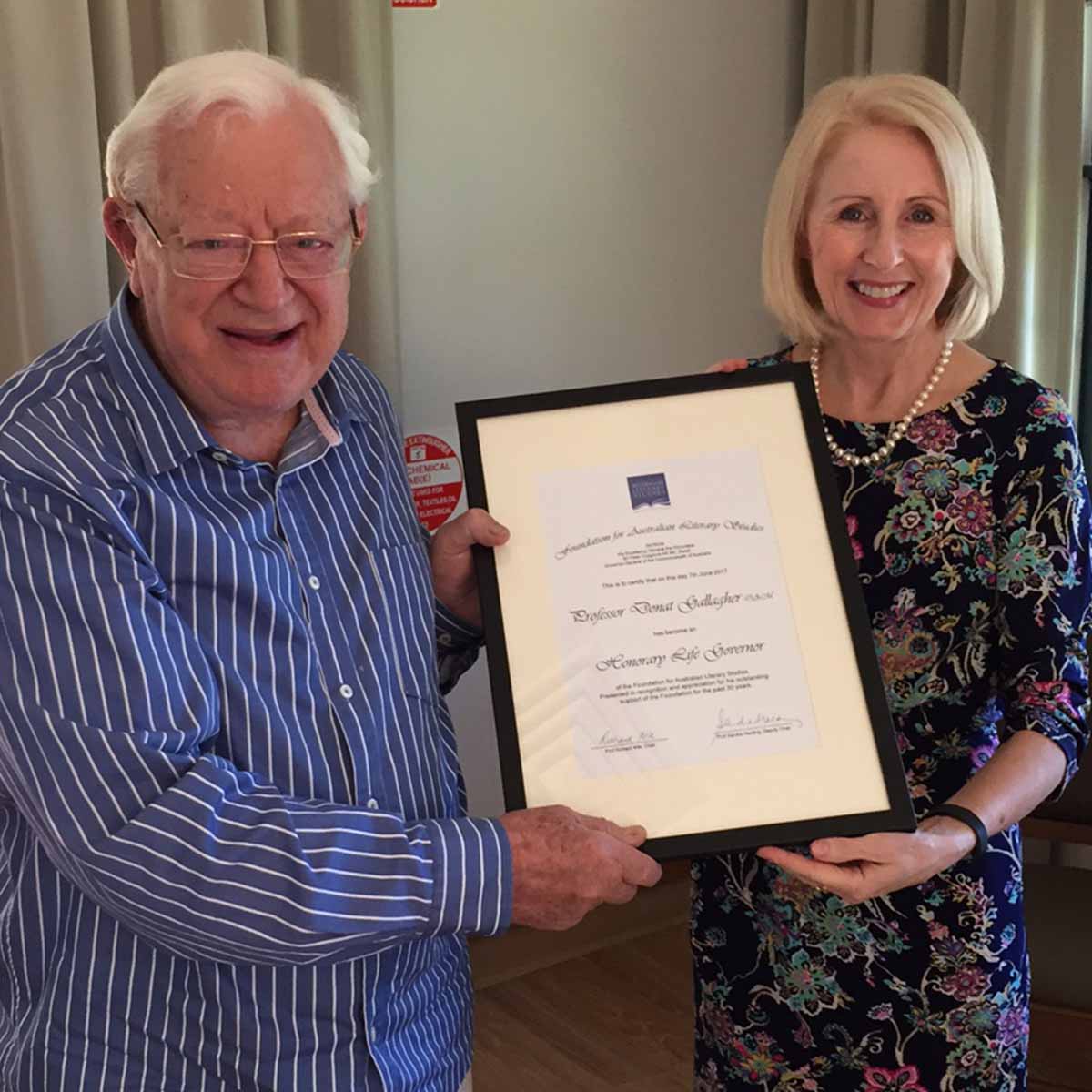 Emeritus Professor Sandra Harding AO served as Vice Chancellor and President of James Cook University Australia from January 2007 to February 2022. In this role, she was responsible for ensuring clear and effective leadership and management of the University across all operating sites, including campuses in Cairns, Singapore and Townsville. Her keen focus on the Tropics and leadership of the State of the Tropics project resulted in the United National General Assembly declaring June 29 the UN International Day of the Tropics.

Over her university career, she has undertaken many sectoral leadership positions, including as Chair of the national peak body, Universities Australia, from 2013 to 2015 and as the inaugural Chair of the Queensland Vice Chancellors Committee from May 2020 to December 2021.

A Fellow of the Australian Institute of Company Directors, Emeritus Professor Harding has served as Chair or Director on the Boards or Councils of many organisations across a range of sectors within Australia and abroad.

Leigh has published criticism of Australian writers including Thea Astley, Barbara Baynton, Lionel Fogarty, Miles Franklin, Charles Jury, David Malouf, Dorothy Porter, Katharine Susannah Prichard, Kenneth Slessor and Christos Tsiolkas, as well as articles and book chapters on higher education, colonial history, and the history of teaching literature. With Graham Barwell, she is preparing a critical edition of the novel Coonardoo to be published in 2023. She has been a judge of the Colin Roderick Award (2017 to 2021), the inaugural Barbara Jefferis Award (2008), and of prizes awarded by the Association for the Study of Australian Literature (ASAL).