College of Medicine and Dentistry Make a difference in PNG

Make a difference in PNG 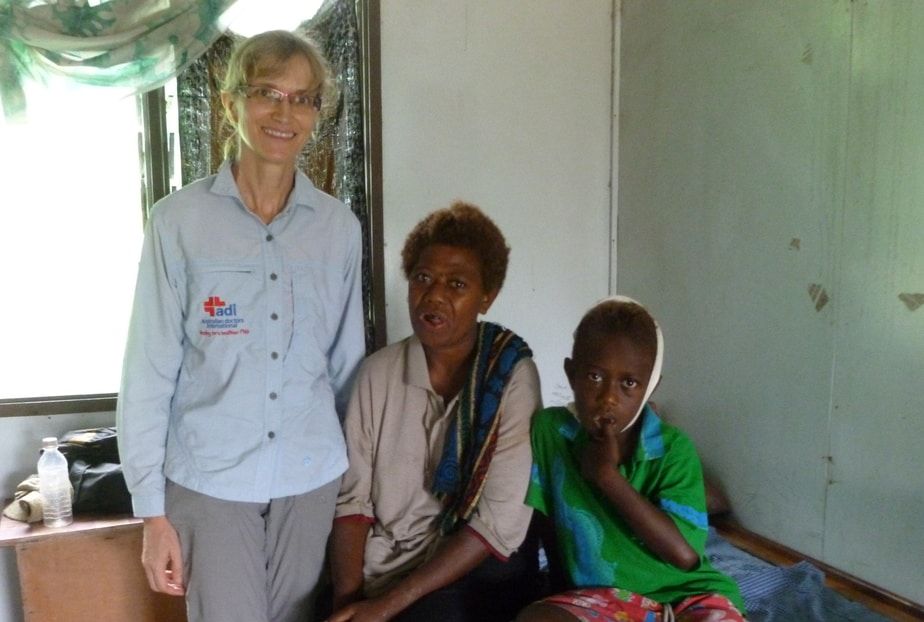 You’ve done the Master of Public Health and Tropical Medicine degree at JCU - now how can you apply what you have learnt? Two JCU alumni doctors - Dr Merrilee Frankish and Dr Matt Kelly found Australian Doctors International (ADI) the answer. ADI is an Australian charity that works to strengthen health services in rural and remote areas of Papua New Guinea (PNG). PNG was selected for ADI’s focus as it is a close neighbour of Australia with significant health needs that we’re in a position to help with.

Doctors Merrilee Frankish and Matt Kelly are both graduates of JCU and have taken time out of their practice to volunteer with ADI and put their interest in tropical medicine to good use.

Dr Merrilee, now a JCU GP Training Supervisor in Mareeba, first volunteered with ADI in 2012 where she was stationed in New Ireland Province. New Ireland is an isolated group of islands in north-east PNG where about 194,000 people live. Thirty-two percent of the population are in paid employment and 68% live a subsistence lifestyle, mainly by selling local produce at local markets. Merrilee shares some of her experience on the ADI website.

Of her experience with ADI Dr Merrilee said: “Working in PNG enabled me to get back to the basics of who I am and what I can do. The tropics, public health and PNG are a personal passion- including tok pisin. I was pushed to my limits and I was able to achieve more than I could imagine for people who have less resources than I will ever know. The highlight was the teaching and great practical retention of people I had helped educate- year after year.”

Dr Matt has just embarked on his adventure with ADI this July, and is off to Western Province, PNG. Western Province is the largest and most remote province in PNG. With few roads and travel by river and air made difficult by the high cost of fuel (about twice the cost of fuel in Australia), Western Province suffers major challenges to the delivery and accessibility of health services and it’s not uncommon for the locals to not see a doctor all year.

Each year ADI takes a maximum of five doctors for placements in either New Ireland or Western Province.  Doctors, nurses and healthcare professionals are drawn to ADI as it is able to achieve great outcomes for rural and remote communities. Even though PNG is our closest neighbour it struggles to combat diseases such as malaria, leprosy, and tuberculosis. Only about one third of the rural population has access to clean water, making cholera and diarrhoeal diseases a continuing threat. Another health challenge is delivering proper antenatal care, family planning and safe and supervised births to rural and remote areas where 87 per cent of the population reside. As a result, infant and maternal mortality rates are among the worst in the world.

As an ADI professional on the frontline you have responsibility to treat and train. A core focus of ADI is capacity building so when our team leaves we leave the healthcare workers in PNG with better skills to be more self sufficient.  It’s important to note that ADI doctors do not work alone. It really is a team effort.

In New Ireland, the doctor travels with teams of PNG district health staff including a dental technician, physiotherapist, maternity and child health nurse, eye nurse, sexual health and lab technician. In Western Province, the team is much smaller with the doctor travelling with one-two Community Health workers and some logistics support.

If you ever wonder where your degree in tropical medicine can take you, then it’s time to consider ADI as a pathway to develop your practice. ADI is a great way to further your skills while helping people who need it most and enjoying an experience of a lifetime. The PNG locals have a fond relationship with ADI doctors and truly appreciate the work they do there.  Dr Merrilee said “ADI’s presence here [in PNG] is warmly welcomed in whichever office I enter, thanks to our wonderful previous doctors and ADI’s management team.”

You can take a sneak peek at the experiences of others on the ADI website and take the step to put your degree to practice.