College of Medicine and Dentistry From life saver to mentor

From life saver to mentor 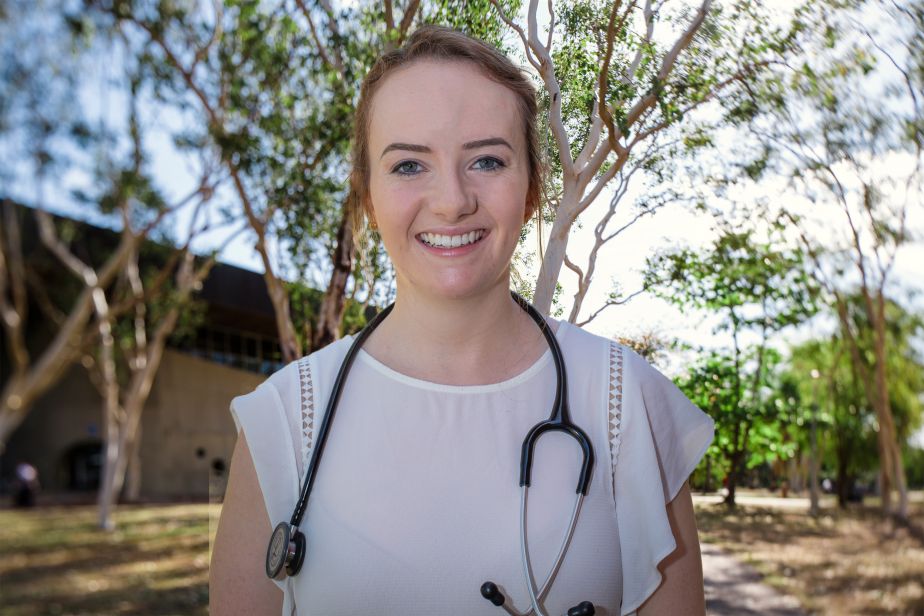 Dr Katherine Godde had no idea that the man who helped save her life as a premature new born, would one day become her mentor.

“My parents told me I wasn’t born crying, which raised alarm bells, so I was airlifted to Canberra Hospital,” said Dr Godde.

There she was cared for by Dr Gaun Koh and Dr Ryan Reynolds. They diagnosed her with Hyaline Membrane Disease, now known as Infant Respiratory Distress Syndrome.

“It meant that the alveoli in my lungs didn’t have enough surfactant in them. If you don’t have it, when you breathe out your lungs collapse and it’s hard to open them again.”

Due to the lack of oxygen she had more complications including Pulmonary Hypertension and Pneumothorax. Dr Koh tried all he could to give her the best chance at survival.

“They put chest tubes in to try and help me breathe. They had me on 100% oxygen, which helped, but as soon as they started to drop it I would start to decline. It was a bit of a balancing act, because if you have 100% oxygen for a prolonged period of time you can get Retinopathy of prematurity – it basically damages your retina and you can lose vision.”

Dr Godde was in hospital for nearly four weeks. Her parents remarked on how Dr Koh was so empathetic and compassionate during that time.

“He would say ‘you just need to respect the baby and the brain’. He provided that sense of hope because my parents were pretty fragile. I was their only child.”

Dr Godde pulled through those tumultuous early weeks, to become a thriving young woman. She moved with her parents to Townsville during primary school, completed year 12 at Townsville Grammar and was accepted into the Medicine program at James Cook University.

Dr Godde and her parents never thought they would cross paths with Dr Koh again, until he popped up on a local TV news bulletin one night.

“I was in my first year of med school. We saw on the news that Townsville University Hospital NICU (Neonatal Intensive Care Unit) had received a big grant. Dr Koh was on the news talking about it,” she said. “Dad was like ‘That’s the guy! turn it up!’ Sure enough there’s Dr Guan Koh, with a bit less hair than when Dad knew him.

The Townsville Hospital NICU office managed to arrange a meet up for Dr Godde and Dr Koh, who was now the Clinical Director of Neonatology.

“I went for the hand shake and Guan went in for the hug… which just shows how sweet he is. He said ‘I remember you’. I know you can just say that but I think he genuinely meant it.”

Dr Godde remained in contact with Dr Koh throughout her medicine degree at JCU. He became a mentor for her. She is looking forward to bumping into him during her intern year in Townsville. She said the Townsville University Hospital was her first preference for her internship.

“I think we're very fortunate and it's often overlooked how good the Townsville Hospital is. They have excellent facilities. For example, Dr Guan spoke at Dad's Rotary Club recently about how his NICU facility is arguably better than the two NICU facilities in the Brisbane region. But a lot of people might just say ‘ah it's Townsville’, we've got to go to Brisbane for the good care. I disagree. I think there's a lot of really smart clinicians here and really good resources.”