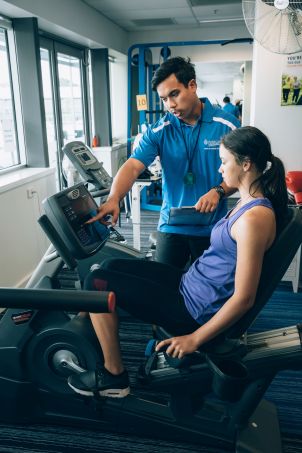 Anthony coaching a client during his studies

Anthony Nicholls knows all too well that hard work and dedication pays off. Growing up on Thursday Island and transferring his senior schooling years from Tagai Secondary College to Peace Lutheran College in Cairns, Anthony was accepted into a Bachelor of Physiotherapy in at JCU Townsville straight out of high school.

After failing multiple subjects, a change of degrees, acquiring the skills to become an independent learner, and a wide range of work experience, Anthony graduated his Bachelor of Sport & Exercise Science degree with First Class Honours and an Academic Medal.

He is now living and studying his Master of Physiotherapy in Sydney and has landed a job as a Trainer for the Greater Western Sydney Giants in the AFL Women’s league. Anthony is well and
truly on the road to success.

“I studied sport science for two reasons – it was necessary for me to study the intricacies of sport science due to my passion and aspirations of working in high performance sport; and I understood that being competitive whilst completing an Honours degrees opened up further postgraduate study and career opportunities,” said Anthony.

“I completed an internship at the North Queensland Cowboys during my studies at James Cook University and I was able to put professional skills and theory into practice prior to graduating. During this time I also volunteered across various Townsville rugby league and rugby union teams, worked for JCU Sport as a Sports Trainer, and worked as an Academic Support Advisor within the IERC.” 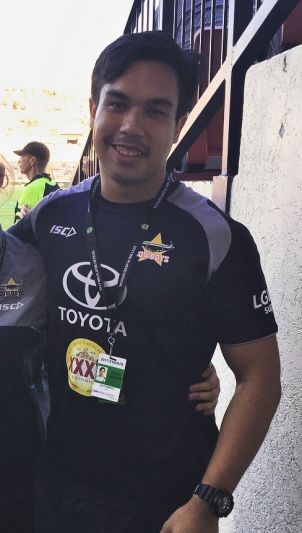 Anthony during his internship with the NQ Cowboys

Not long after settling to his new home in Sydney, Anthony landed his current position as a Trainer for the GWS Giants in the AFLW League. In this role he works with a team of trainers to provide training and game support to the players, including pre-game strapping and massage, running water and attending to injuries during gameplay.

“I am fortunate to be working with two experienced and enthusiastic physiotherapists who have been mentors to me, answering clinical questions and allowing me to gain valuable experience during my studies.”

Anthony largely credits his success to the support and guidance he has received over the years – his academic mentor, Rachel Elphick, who assisted Anthony at the AFL Cape York House and throughout his university career; his family on Thursday Island; his IERC family; access to IPAL tutoring; and being awarded the Puggy Hunter Memorial Scholarship Scheme (2014 – 2017). However, I think we can all agree that Anthony’s hard work and resilience have led him to where he is now.

“As a black fella who has moved away from family and community to study it has been the most daunting, yet rewarding experience. There were many difficult times throughout my studies, such as family deaths, failing subjects and the burden this carries and mental health issues which really amplified the feeling of being homesick and away from your immediate family. It was important for me to build a family within the Indigenous Education & Research Centre (IERC), both with staff and students in order to get me through.”

Anthony offers the following advice to those considering studying, “Go into a sport science degree with no stone left unturned. Be open to new opportunities and work hard in the classroom, as these efforts will open doors for you. It is also wise to volunteer as much as you can and gain relevant experience during your studies. It is particularly hard to find work in professional sport, so volunteering whilst you study will allow you to upskill outside of the classroom.” 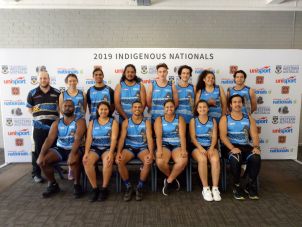