Sir Charles Maurice Yonge (1899-1986) was a highly distinguished marine zoologist whose contribution to marine science and especially malacology, was long and productive, with a publication record spanning 63 years. He led the highly successful Great Barrier Reef Expedition of 1928-1929, which opened up the scientific world to the wonders of the Great Barrier Reef, and laid the foundations of scientific study into modern coral reef biology. He was a dedicated scientist who travelled widely, a fine teacher and a prolific writer. He inspired generations of upcoming young scientists around the world to take his research further and discover more.

Throughout his life, Sir Maurice acquired an extensive private library of books, reports and papers relating to all aspects of the sea, in all its wonders. In 1982, knowing that his health was failing him, he sold his private scientific library to the Australian Institute of Marine Science (AIMS). Sir Maurice had undertaken a six-week research trip to AIMS in 1978, and formed such lasting bonds with scientists and personnel there, that he felt the most appropriate home for his library was at AIMS.

Comprising around several thousand items, the collection includes works published from the early 1700s to the twentieth century. The subject range of the collection is overall marine, with malacology a strong subject area. Many other marine subjects are also represented, such as oceanography, fisheries, marine biology, marine botany and zoology, biographies, records of major scientific expeditions, history, marine fiction, anthologies & poetry, and even seafood cookbooks.

The collection held pride of place in the AIMS Library from 1982 to 2016. In order to ensure safe, long-term preservation of the collection, it was gifted to James Cook University Library in 2016, and is now housed under strict archival conditions in Special Collections. 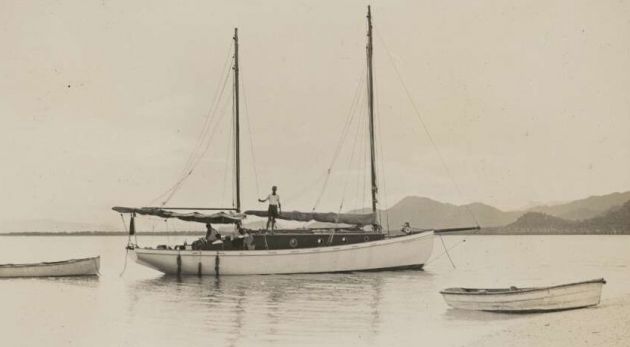 The Luana, at Snapper Island, 1928.
Photo: National Library of Australia.

Read more about the Expedition to the Great Barrier Reef 1928-1929 and the Sir C.M. Yonge Collection in this fabulous series of blog posts by Trisha Fielding, Special Collections Library Officer:

The Collection comes to JCU:

Highlights from the Collection:

Listen to the ABC North Queensland's Pat Hession discuss the Yonge Expedition and Collection with Bronwyn McBurnie and other special guests. Click on the image to hear the podcast.