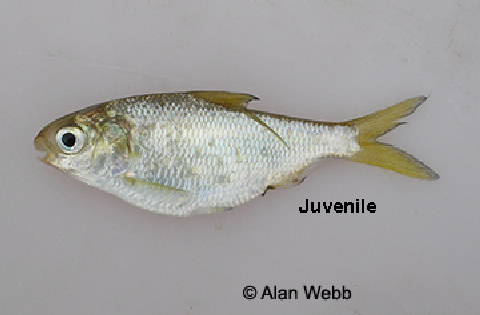 A moderate-sized, deep-bodied, laterally compressed fish. Males and females similar in appearance, though females usually grow to a larger size. The species is silvery with occasionally a greenish or grey or even reddish tinge and the back is darker than the sides. The snout is blunt and the mouth is small with a distinct central groove. The dorsal fin is small with a long filament extending from the lower posterior edge, while the caudal fin is distinctly separated into 2 lobes, usually yellowish in colour. These fish which form large shoals chiefly feed on benthic algae but may also feed on detritus and small invertebrates.