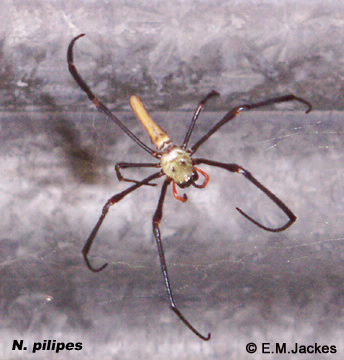 There are three species which can be found on campus or nearby. The northern golden orb weaver, Nephila pilipes (syn N. maculata), is the largest, female to 4 cm long, distinguished by the reddish palps, and discrete patches of yellow on the leg joints and the large web is usually build in or between shrubs; Coastal golden orb-weaver, Nephila plumipes, female about 21 mm long, distinguished by the elliptical body, the yellowish bands near the end of each leg segment, and the large, strong yellowish web which is built between dead branches. The much smaller male (about 5 mm long), is often near the edge of the web; Golden orb-weaver, Nephila edulis is similar in size to the previous species as are features of the web, but the female is easily distinguished by the black brushes along the legs. Eggs usually yellow, in sacs near edge of web.