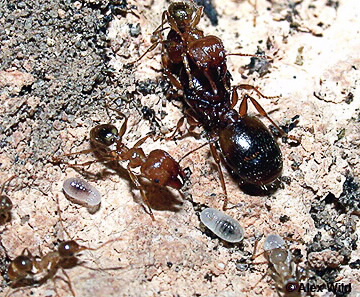 This species is a cosmopolitan pest thought to have arisen in Africa. The genus is predominantly a harvester ant genus, but P. megacephala appears to be predominantly a scavenger in houses and nearby. The commonest specimens are the small workers, with the large soldiers a minority of the ants seen; the larger queens are seldom seen but there are several to many per aggregation. They do not have a sting which hurts humans. The common name “big-headed ant” is highly misleading, because the whole genus meets this description. Figured are workers, soldiers and a queen, seen in South Africa, photo courtesy of Alex Wild, http://www.myrmecos.net/ants/