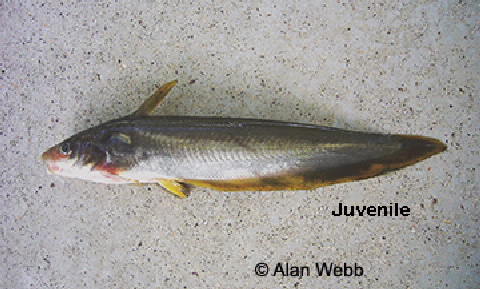 This catfish has the dorsal fins well separated, the second fin is close to the caudal fin and fuses with it and the anal fin to produce an eel-like tail. There is a sharp toxic spine on each pectoral fin and on the dorsal fin. It is variable in colour, the most common form is silvery with yellow on the fins. The snout is rounded, 4 pairs of barbels or ‘whiskers’ near the mouth are present. This fish likes slow flowing streams, but it is tolerant of turbid water. Creeks on campus are important spawning areas as the fish migrate upstream from the main river channel during the wet season when the creek is flowing and deposit their eggs in the coarse sediments of the pools. Feeds mainly on aquatic insects, molluscs and small crustaceans.