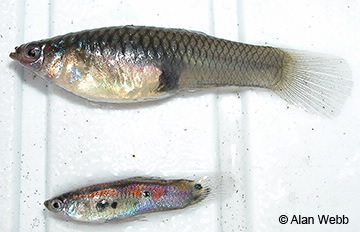 Guppies are live bearers and native to Caribbean islands and northern, tropical South America. Females are larger than the males. The male has coloured blotches (typically red, orange, blue, yellow or green) and several dark spots on the body and near the caudal fin. Brighter colours have been bred for the aquarium trade. Males may have the tail fin margin extended to form a small sword, but lack the enlarged fins seen in ornamental forms. The anal fin in males is modified to form a gonopodium for sperm transfer. There is one dorsal fin. The female is pale olive green and lacks spots on the body and fins. These fish will tolerate a wide range of freshwater and brackish habitats and can withstand high temperatures and low oxygen conditions. They are omnivorous feeding mainly on small invertebrates, detritus and occasionally fish eggs.