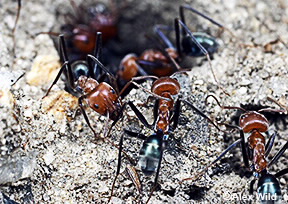 The genus Iridomyrex is found almost everywhere in Australia, and meat ants (I. purpureus group, of which I. reburrus is one) dominate the environments in which they occur. The nest form varies between species from large gravel-topped mounds to single holes. Workers form large trails and often clear roads through grassland. In some cases colonies have many nests and territories of a square kilometre or more. Famous scavengers (hence the name) meat ants also tend leafhoppers on trees, and protect these from predators. These ants lack stings, smearing defensive secretions on enemies. Figured are specimens seen at Coen, photo courtesy of Alex Wild, http://www.myrmecos.net/ants/