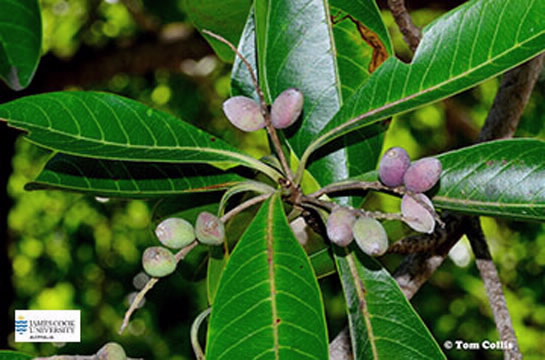 Although not accepted by all herbaria, it is now considered by many that Terminalia sericocarpa is synonymous with Terminalia microcarpa, which was a species previously considered to only occur in New Guinea. (Refer to Australian Plant Census) The leaves on this species are smaller than on the other species on campus. The size of the obovate, alternate leaves ranges between 6-13.5 cm long and 3-6 cm wide, shiny on upper surface but with some small, silky hairs present on the lower surface, domatia present in some of the axils between lateral veins and the midrib. Flowers borne in axillary racemes, pale green with a strong smell of honey; fruit obscurely winged to 1.8 x 1 cm. This tree, which is deciduous in the dry season is common on both campuses particularly along half Moon Creek. Green ants often occupy these trees and when they do, then oak-blue butterflies, genus Arhopala will often be seen. The larvae of this butterfly are closely attended by green ants, and they then pupate in the curled leaves.

JCU acknowledges the Yirrganydji and Djabugay Peoples for sharing the following information. “The fruits are edible but not the seed. Fruits are used for bait to catch birds. Material from the tree is used as a fish poison. There is no common name”