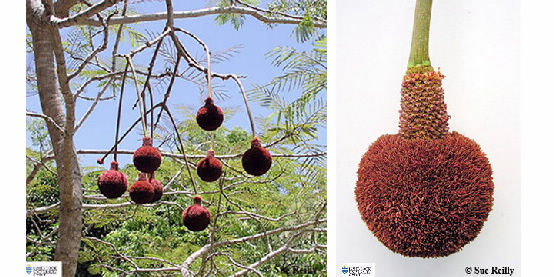 This leguminous tree from central Africa has alternate leaves, bipinnate and up to 36 cm long. Size and number of pinnae and ultimate leaflets varies, on this tree the leaflets are about 12 mm long and 8 mm wide. This drought adapted tree is often leafless when flowering commences. The flowers are borne in pendent capitula or heads at the end of a thick peduncle up to 25 cm long. A cluster of capitula resemble “Christmas Tree ornaments”, flowers appear red because of the exserted staminal filaments and style. The head is divided into two sections, a cylinder about 2 cm long and a globular head about 6 cm diameter. Forming a fringe at the top of the cylinder are the staminodial flowers, these are followed by the nectar producing flowers, both types are about 7 mm long, stamens in the latter do not appear to be fertile, but the base of the staminal filaments are nectariferous, producing copious nectar late in the afternoon and evening, a strong fruity odour is present. The bisexual flowers are tightly packed together to form the globular head. These flowers are about 17 mm long with the red stamens extending about 4 mm beyond the corolla lobes. In Africa the long bean-like pods are used in various ways for food and medicine. Flowers on each mature capitulum open late in the afternoon, first the flowers in the staminodial fringe then the others. Copious nectar is produced much of which collects in the area between the cylinder and the globose head. Pollinators are bats but bees, birds and other insects visit for nectar. Pollen is in the form of polyads as in wattles. Twenty four hours after opening the flowers fall if not pollinated.